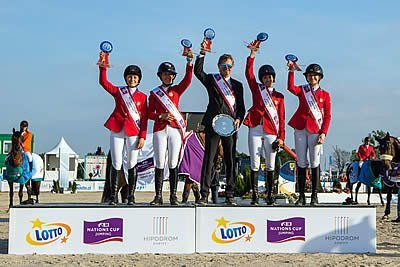 Sopot, Poland – The Hermès U.S. Show Jumping Team had a strong performance at their first European FEI Nations Cup competition of the season, facing off against 12 other teams and winning gold after an intense fight to the finish. Olaf Peterson Jr.’s course proved to be challenging with only one combination going double-clear. Led by Chef d’Equipe Robert Ridland, the U.S. team of Lauren Hough, Laura Kraut, Chloe Reid, and Paris Sellon held on through a jump-off against the Netherlands to claim top honors on a final score of 13 faults.

“It was unbelievable,” Ridland said of the unfolding of events. “There is always more pressure when you are in the lead after the first round. The last few years, we have come back to catch up with seemingly unsurmountable leads, so we knew full well that the lead after the first round could be fleeting. We tried to keep our focus the whole time and had plans for what the outcome could be before our final rider went into the ring in the second round. It was a great day for the sport.”

Hough (Wellington, Fla.) and Waterford were the first pair on course for the U.S. and incurred one time fault to get the team off to a solid start. Riding second for the U.S., Sellon (Los Angeles, Calif.) struggled to find a good rhythm with Cassandra, tallying 18 faults. Reid (Washington, D.C.) and Codarco produced a fantastic clear round which was matched by anchor combination Kraut (Royal Palm Beach, Fla.) and Deauville S. The performances of Hough, Reid, and Kraut allowed Sellon’s score to be dropped, putting the U.S. team on a total of one fault after the first round.

Despite an eight-point lead over the next best team, the U.S. team had to fight to stay in contention in the second round. Hough and Laura and Meredith Mateo’s 2003 Dutch Warmblood gelding suffered rails in the triple combination for eight faults. Sellon and Willow Grace Farms’ 2008 Swedish Warmblood mare had an improved round with better harmony, though incurred nine faults. Reid and Team Reid, LLC’s 2007 Irish Sport Horse stallion seemed to be on their way to a double-clear performance but had the A element of the triple combination down for four faults. With these penalties, the U.S. team sat on a best possible score of 13 faults going into the final rider rotation. Kraut and Old Willow Farms LLC’s 2006 Holsteiner gelding needed to deliver a clear round to tie with the Netherlands for the lead and put the two nations into a jump-off. They did just that, having the only double-clear performance of the day.

The Dutch Chef d’Equipe tapped Sanne Thijssen for the jump-off and she scored four faults in a time of 38.03 seconds with Con Quidam RB. The pressure was on Kraut and Deauville S as Chef d’Equipe Ridland’s chosen combination. Despite having a rail early on in the jump-off course, they sped through the timers at 36.29 seconds to clinch the gold.

Find out more about CSIO5* Sopot.