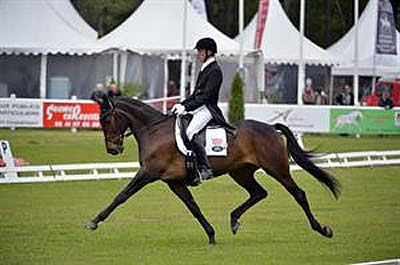 Saumur, France – The rain that has plagued much of the week at the Saumur CCI3* continued on Friday but the two U.S. entries were undeterred as they slotted into the top 10 at the completion of the first phase. Land Rover Competition Grant recipient, Doug Payne, leads the American effort standing fourth heading into the cross country, with Elisabeth Halliday-Sharp lying eighth after the dressage.

Payne (Apex, N.C.) and his own and Larry and Amelia Ross’ Crown Talisman earned a mark of 43.4 from the Ground Jury of Alain James, Sandy Phillips, and Catherine Agaesse for their accurate, expressive test. The winners of the CIC3* at Jersey Fresh two weeks ago head out onto the Pierre Michelet designed cross country within five points of the leaders.

Looking towards the 29-obstacle track, Payne believes Michelet has set a demanding track that will test accuracy from start to finish but believes his 11-year-old Holsteiner/Thoroughbred is up to the task.

“I’m very happy with the course. I think it suits Tali well,” stated Payne. “If you’re off your line at any of these combinations or fail to get their eye on the next element soon enough you’ll absolutely have trouble.”

Halliday-Sharp (East Sussex, United Kingdom) produced a consistent test with Deborah Halliday’s Fernhill by Night to a score of 46.6 to be within striking distance after the dressage. She will look to utilize the 11-year-old Irish Sport Horse gelding’s ground covering stride and scopey jump to climb the leaderboard over the remainder of the weekend.

France’s Luc Chatea and Propriano de l’Ebat lead the field after the dressage on a score of 38.8 and are closely followed by day one leaders, Andrew Hoy and Cheeky Calimbo of Australia in second on 39.2, the French combination of Maxime Livio and Qalao des Mers head onto the cross country in third place with a score of 41.2.

Halliday will be first for the U.S. on Saturday setting out at 3:14pm CEST and Payne follows an hour later at 4:18pm CEST.

To learn more about the Saumur CCI3*, visit http://www.saumur.org/cci/accueil-gb.html.