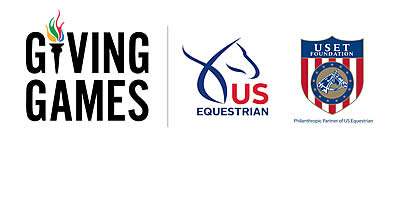 Lexington, KY – US Equestrian and the United States Equestrian Team (USET) Foundation have announced their joint participation in a collaborative and creative fundraising campaign launched by Olympic & Paralympic National Governing Bodies (NGB) titled the Giving Games. The Giving Games’ ultimate goal is to support and sustain U.S. athletes ahead of the Tokyo Olympic Games, which have been postponed to the summer of 2021.

U.S. athletes rely heavily on their NGB organizations to financially assist with training and preparation needs, and many athletes are facing financial hardships and challenging obstacles due to the significant number of domestic and international competition cancellations so far this year. Joining 20 other NGBs within the U.S. Olympic & Paralympic movement, US Equestrian and USET Foundation will partake in the multi-week fundraiser beginning Friday, July 24, and running through August 9, 2020, the original window of this summer’s now postponed Games.

The philanthropic effort is multi-faceted with varying donation opportunities, including pooled funds and direct giving opportunities to the USET Foundation. All funds raised will be received via direct donation or equally divided among participating organizations in order to support their athletes’ needs as they prepare for an additional year of training as a result of the COVID-19 pandemic postponement.

Fans and supporters of U.S. equestrian high performance athletes, US Equestrian, and USET Foundation can contribute to the Giving Games in the following ways beginning Friday, July 24:

The Giving Games effort has partnered with notable brands, corporations, and businesses including BuzzFeed and Omaze to create unique and exciting ways for fans and supporters to continue contributing to the Giving Games effort, which will be announced in the coming week.

To learn more about the Giving Games, please visit giving-games.com.