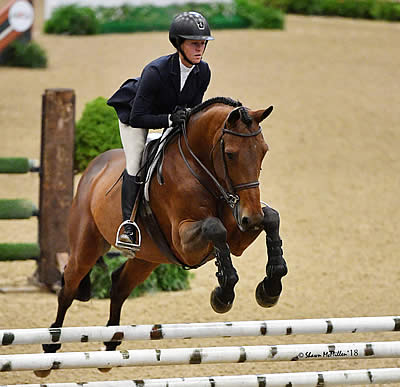 Lexington, Ky. –US Equestrian is pleased to announce the recipients of the Lifetime Achievement Award and the Junior Equestrian of the Year Award to be acknowledged at the 2019 US Equestrian Annual Meeting at the Hilton West Palm Beach in West Palm Beach, Fla. Georgie Green is the winner of the 2018 Lifetime Achievement Award, while Isabela De Sousa is the 2018 Junior Equestrian of the Year. Both Green and De Sousa will be recognized at the Pegasus Awards on Thursday, January 10, 2019, along with other prestigious award winners.

Green (Morgan Mill, Texas) has been a dedicated leader for the Morgan breed. For more than 40 years, Green and her husband, John, have owned and operated Roadshow Morgans, the largest Morgan breeding operation in Texas and one of the largest amateur operations in the country. They purchased their first Morgan horse, Funquest Paddy, in 1972 and their first breeding stallion, Showcase, in 1973, which has led to more than 100 horses with the Roadshow prefix. These top-quality horses have become world and national champions, local winners, and beloved family pets. Green’s dedication to this American horse is exemplified by her work to foster interest for pedigreed livestock in younger generations.

Green joined the American Morgan Horse Association (AMHA) Board of Directors in 1980. Five years later, she was named AMHA’s Woman of the Year, as well as the organization’s first female president. She served as AMHA president from 1985 to 1988 and again from 1993 to 1996. For nearly 30 years, Green served on its Board of Directors and chaired several committees, including the all-important Registry Committee. Outside of AMHA, Green served on the show committee for the Grand National & World Championship Morgan Horse Show® for many years, serving as show chair three times. She also served on the USEF Board of Directors as the Morgan breed representative and currently sits on the USEF Morgan Sport Committee.

Green was honored with the National Pedigreed Livestock Council’s 2007 Distinguished Service Award for those whose dedication to their chosen breed is exhibited through extensive altruistic endeavors. Now, Green is the recipient of the USEF Lifetime Achievement Award for her undying commitment to the Morgan breed, which has elevated the sport’s excellence.

As Junior Equestrian of the Year, De Sousa (Lexington, Ky.) will be presented with the Ruth O’Keefe Meredith Memorial Trophy. At the age of 17, De Sousa is already an exemplary ambassador for equestrian sport, in particular for the Thoroughbred horse. She has been riding all her life and has been retraining off-the-track Thoroughbreds for the last few years. De Sousa has found much success in the Retired Racehorse Project’s Thoroughbred Makeover, winning the show jumping division from 2015 to 2017. She displays her maturity as a consummate horsewoman by treating the Makeover as icing on the cake versus a hard-fought goal for the Thoroughbreds she retrains. Her ultimate goal is to provide the horses with a solid foundation and start them on a second career path that they can enjoy in their new homes.

In 2018, she retrained Cozmic One, the first foal of famed racehorse Zenyatta, and finished fifth in the Makeover show jumping division. In addition to her strong placing, De Sousa used her social media influence on the de Sousa Stables Facebook page throughout Cozmic One’s retraining process to educate fans about how Thoroughbreds can be retrained after their careers on the racetrack and the positive side of racing and the Thoroughbred industry.