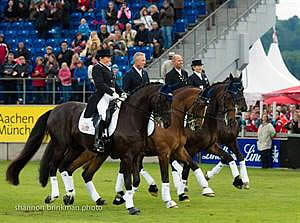 “Our Nations Cup riders came here for a medal and they did not disappoint. Each of them showed why they are among the best in the world,” said Chef d’Equipe Robert Dover. “Led by Steffen Peters, who is, in my opinion, one of the greatest show ring riders of all time; Legolas 92 was simply fantastic, placing 5th overall, a great feat for such a young horse. Tina Konyot and Calecto V looked elegant and composed and are one hundred percent on the road toward a huge score, very soon. The same must be said for both Jan Ebeling riding the great mare, Rafalca, and Shelly Francis on her Doktor.”

Peters (San Diego, CA) rode in his familiar position as anchor for the U.S. Team and, as he has done so many times, delivered when the stakes were at their highest. Riding Four Winds Farm’s Legolas 92 the 2010 Alltech FEI World Equestrian Games dual Bronze medalist scored a 75.298% in the FEI Grand Prix Test to finish in fifth place individually in the Preis der Familie Tesch.

The pair performed a fluid, elegant work to collect top marks throughout their test, highlighted by the 11-year-old Westphalian gelding’s proficiency in the piaffe and passage. Legolas 92 also demonstrated a matured partnership with Peters as the pair executed improved flying changes, a movement that had hampered their scores in the past.

Konyot (Palm City, FL) and her own 15-year-old Danish Warmblood stallion Calecto V finished on a score of 71.064% for a 16th place finish in the Preis der Familie Tesch. The combination is among the most experienced on the international circuit, having represented the U.S. at the 2010 Alltech FEI World Equestrian Games and 2012 Olympic Games, and demonstrated their capability throughout their test in the Deutsche Bank Stadium.

Calecto V once again performed the accurate and expressive flying changes that have earned him high marks throughout his career. The veteran pair also received top scores for their reinback. A mistake in the piaffe-passage-piaffe transitions on the final centerline kept Konyot from finishing higher up the individual leaderboard.

Francis (Loxahatchee, FL) had the unenviable position of being the first competitor down centerline in the Deutsche Bank Stadium on Thursday. Undeterred by her starting spot the 1998 FEI World Equestrian Games veteran guided Patricia Stempel’s 10-year-old Oldenburg gelding Doktor to one of their best performances of the year, scoring 69.596% for 20th place. The combination was rewarded with high scores for their piaffe and reinback.

“With all four of our combinations going forward to the Grand Prix Special on Saturday, I am thrilled they all placed in the top 20 at this, the strongest show in the world,” said an elated Dover. “Tonight, our team will ride together into the main stadium in front of 65,000 people to receive the bronze medal for America. Thanks must go to them, their horse owners, trainers, grooms, vets, assistants, supporters and Jenny Van Wieren-Page, our super manager!”

Germany took home top honors in the Lambertz FEI Nations Cup with a score of 232.150, led by reigning Reem Acra/FEI World Cup Final Champions Helen Langehanenberg and Damon Hill who scored 81.128% to also place first in the Preis der Familie Tesch. Second place went to the team from Denmark with a total of 223.043.

To learn more about the CHIO Aachen, visit: http://www.chioaachen.de/en/programm-sport.