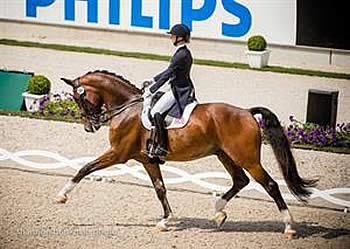 Aachen, Germany – Six members of the Short List for the 2014 Alltech FEI World Equestrian Games U.S. Dressage Team took their first steps in competition on Wednesday and Thursday, performing the FEI Grand Prix Test at the prestigious CHIO Aachen, where they are joined by Kathleen Raine. Laura Graves, Adrienne Lyle, Caroline Roffman, and Tina Konyot represented the U.S. in the Lambertz FEI Nations Cup, held as part of the CDIO5* competition, on Thursday, while Shelly Francis, Lisa Wilcox, and Kathleen Raine went down centerline on Wednesday in the HAVENS Horsefeed-Prize.

The U.S. secured a seventh-place finish on Thursday afternoon in the Lambertz FEI Nations Cup on an overall total of 213.740. Germany proved to be a popular winner on its home turf, finishing on a total of 243.100, with The Netherlands finishing second on a score of 223.380, and Spain earning third place with a team total of 220.600.

Leading the way for the U.S. on Thursday was Graves (Geneva, Fla.) and her own 12-year-old Dutch Warmblood gelding, Verdades, with a score of 73.000%. The 2014 Reserve National Champions finished 13th individually.

Graves, Roffman, and Lyle head on to Saturday’s Grand Prix Special for the CDIO5*.

Jessica von Bredow-Werndl of Germany and Unee BB won the HAVENS Horsefeed-Prize with a score of 73.220%, after coming out on top of a tie with fellow German rider Fabienne Lütkemeier and D’Agostino FRH, who were second. Beata Stremler of Poland and Rubicon D were third with a score of 72.400%.

Wilcox and Raine will move on for the U.S. in the Grand Prix Special on Friday, while Francis heads to the Grand Prix Freestyle on Saturday for the CDI4*.