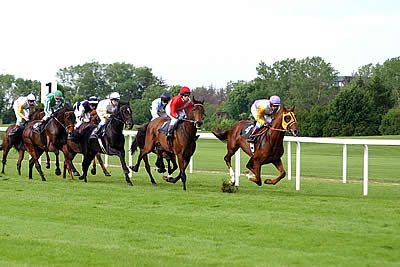 Horse racing is an ancient sport. Its origins date back to about 4500 BC among the nomadic tribesmen of Central Asia (who first domesticated the horse). Since then, horse racing has flourished as the sport of kings. In the modern day, horse racing is one of the few forms of gambling that is legal throughout most of the world, including the United States. You will want to take advantage of the BetAmerica promo code so read these details about the bonus here. This promotion is available to all players who have never held a BetAmerica account. Players receive one 100% matched deposit bonus, based on their first deposit.

Horse racing in the United States dates back to 1665, which saw the establishment of the Newmarket course in Salisbury, New York, a section of what is now known as the Hempstead Plains of Long Island. This first racing meet in North America was supervised by New York’s colonial governor, Richard Nicolls. The area is now occupied by the present Nassau County region of Greater Westbury and East Garden City.

There were 314 tracks operating in the United States by 1890, and in 1894, the American Jockey Club was formed. The anti-gambling sentiment prevalent in the early 20th century led almost all states to ban bookmaking. Bookmaking is the process of taking bets, calculating odds, and paying out winnings. This nearly eliminated horse racing altogether. When pari-mutuel betting was introduced in 1908, the racing industry turned around. Horse racing flourished until World War II.

The sport did not regain popularity in the United States until horses began to win the Triple Crown, a series of three races, consisting of the Kentucky Derby, the Preakness Stakes, and the Belmont Stakes.

Jim Fitzsimmons and Bob Baffert are the only two trainers to have two horses win the Triple Crown, with Fitzsimmons training the sire/son combination of 1930 winner Gallant Fox and 1935 winner Omaha and Baffert training 2015 winner American Pharoah and 2018 winner Justify. The wins by Fitzsimmons were also the first time that an owner and the first time that a breeder, Belair Stud holding both duties, had a repeat win of the Triple Crown. Calumet Farm is the only other owner with two Triple Crown horses, 1941 winner Whirlaway and 1948 winner Citation. Eddie Arcaro is the only jockey to ride two horses to the Triple Crown, both for Calumet, Whirlaway, and Citation. Those two horses’ trainers, Ben Jones and Jimmy Jones, were father and son.

In the United States, Thoroughbred flat races are run on either dirt, synthetic, or turf surfaces. Other tracks offer Quarter Horse racing and Standardbred horse racing, or combinations of these three types of racing surfaces. Racing with other breeds, such as Arabian horse racing, is found on a limited basis. American Thoroughbred races are run at a wide variety of distances, most commonly from 5 to 12 furlongs (0.63 to 1.50 mi). The shorter distances are more common but the mid-to-long distance races tend to be higher in prestige. With this in mind, breeders of Thoroughbred race horses attempt to breed horses that excel at a particular distance.