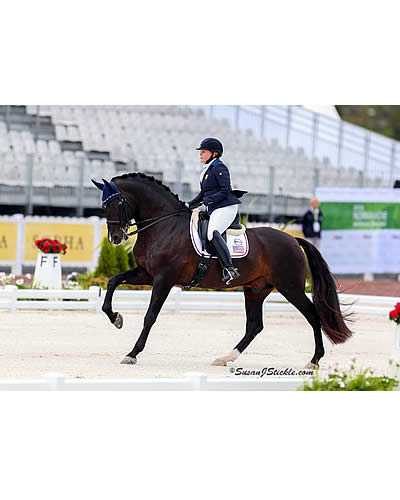 Grade IV rider and 2010 and 2014 Alltech FEI World Equestrian Games U.S. athlete, Susan Treabess (Winters, CA), had a top performance in the Team Test earning a 70.079%. The duo of Treabess and the 2005 Pura Raza Espanol Stallion Kamiakin have been competing in able-bodied and para-dressage competitions all year and have had numerous successes along the way. Treabess is looking forward to Sunday’s Freestyle competition.

Treabess noted, “I’m absolutely thrilled with my rides and even more so with Kam. He’s really come on in the months since the WEG and I’m so happy it translated to the ring. He’s maturing to a point where he’s confident and powerful and he’s really become a great partner. Our next steps are to show him Prix St Georges and Intermediaire I throughout the summer to confirm him at FEI. I’m so excited about him; he’s a blast to ride and a cool horse to be around. His future is bright.”

Grade III rider Lara Oles (USA) of Heber City, Utah and her new partner Bella, a Canadian Sport Horse, earned the blue both days with a 68.991% in the Team Test followed by a top score in the Individual Test. Kate Shoemaker (Glendale, AZ) earned the second place with her own Pacifec M followed by Canadians Tristiana Allwood and Rufus and Sara Cummings and West Bay in 4th place both days.

Lara Oles commented, “The past two days have been like a dream come true. This is our first CDI and Bella has been amazing. After we won the Grade lll Team Test, I cried when they played the National Anthem; I was so overwhelmed. I feel like everything that has ever happened in my life has led me to this one defining moment. The past three years since I started competing in Para Dressage have been my happiest yet. I look forward to the future with my Team including Annie Sweet, my trainer, my ‘manager’ husband, Dan Oles, and my extraordinary Canadian Warmblood mare, Bella. Thank you to all my sponsors; I couldn’t be here without them.”

In Grade II, Ashleigh Flores-Simmons and new horse Danish Warmblood Binero, owned by Brie Simmons of Elk Grove, CA, earned the blue both days followed by Canadian Jennifer McKenzie with Lexington Star Brite. Flores-Simmons began her Para-Dressage journey on an Arabian and in three years is now aiming at the 2016 Paralympics with her high performance horse Binero.

Riders will have an opportunity on Sunday to showcase their Freestyles on the final day of the Golden State Dressage Classic CPEDI3*.

On June 15-16, 2015 9:00 AM – USEF High Performance West Coast Para Equestrian Driving Clinic for Coaches and High Performance Drivers occurs. All levels welcome from Novice to Advanced and there is no fee. Those interested may borrow a horse and carriage or use their own. Clinicians include Hardy Zantke and Diane Kastama. USEF Para-Driving will be providing full tuition. For more information, visit: http://uspea.org/may-17-2015-usef-high-performance-west-coast-para-equestrian-driving-clinic/.