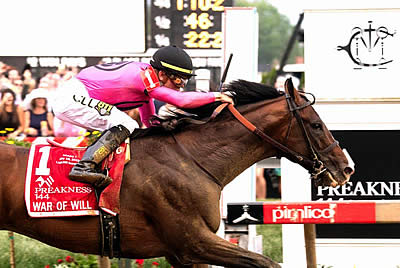 Tyler Gaffalione and War Of Will. Photo By: Jim McCue/The Maryland Jockey Club.

Gilbert, AZ – May 22, 2019 – On Saturday, May 18, a field of 13 horses were led to the finish line by American Equus Chosen Rider Tyler Gaffalione during the 144th run of the Preakness Stakes. Starting at the number one post, Gaffalione piloted Gary Barber’s War Of Will, trained by Mark Cassee, through the 1 3/16 mile race at the Pimlico track in Baltimore, Maryland. Capturing the middle jewel of the Triple Crown, this victory marks Gaffalione’s first Triple Crown win as a jockey.

As the largest Preakness Stakes since 2011, a crowd of 131,256 people watched on as Gaffalione and the 6-1 third betting choice horse made their move through an opening on the rail in the final turn to take the lead and gallop to the finish line. Their impressive time of 1 minute and 54.34 seconds ultimately added to the list of Gaffalione’s 1,086 career wins.

Other American Equus jockeys, Ricardo Santana and Javier Castellano, had an outstanding showing at Pimlico. Santana guided New York Central to a win in the Maryland Sprint Stakes G3 in Saturday’s schedule, while Castellano won an unprecedented 4 races on Friday, including the Black Eyed Susan G2 Stakes on Point of Honor.

“This win marks our companies third back-to-back Preakness win since gaining our first one in 2017. With this additional title we now hold four Triple Crown wins thanks to the world-class jockeys that trust our product and brand to carry them around the track. Tyler Gaffalione is a great representation of the talent we are lucky to have represent us. The whole team at American Equus is proud of this great accomplishment,” shares David Shano, Founder and CEO of America Equus. “With Belmont only three weeks away we cannot wait to see what War Of Will can accomplish next.”