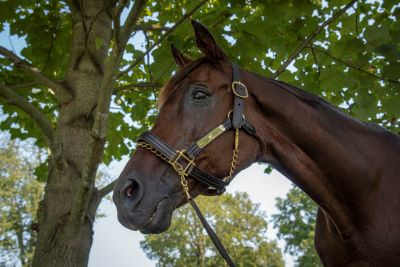 “We will miss Da Hoss greatly. He was a fan favorite as he proved that spirit can triumph over adversity,” said Nicole Rivera, Interim Deputy Executive Director of the Kentucky Horse Park. “I would like to extend a special thank you to Rob Willis and the Hall of Champions staff for the great care and affection they showed Da Hoss during his time here at the park.”

Sired by Gone West, out of Jolly Saint, Da Hoss was foaled on January 18, 1992.  Wall Street Racing bought the lowest priced Gone West foal, Da Hoss, as a Keeneland September yearling for $6000 that same year.  After racing as a two-year-old for trainer Kevin Eikleberry and Wall Street Racing, an 85% interest in Da Hoss was sold to Prestonwood Farm.  He was immediately shipped to Fair Hill training center to start training with Michael Dickinson and Joan Wakefield.

Da Hoss is one of only five horses to win the Breeders’ Cup Mile twice, and the only horse to win twice in non-consecutive years.  Between the 1996 and 1998 Breeders’ Cup Races, Da Hoss was injured three times and did not race for nearly two years. His inspiring finish in the 1998 Breeder’s Cup Mile produced one of Tom Durkin’s most memorable race calls, as he exclaimed: “The greatest comeback since Lazarus!”

“He was our horse of a lifetime,” said trainer Michael Dickinson of Tapeta Farm.  “We all loved him.  He brought us so many highs, even with his problems; we knew he would never let us down. He gave his all and loved to win.  He was spoiled but deserved to be.  He loved going out in one of his grass fields with his best friend Boomer for two or three hours every day.  He knew he was special. It was comforting to know he was always well looked after by everyone at the Kentucky Horse Park where he enjoyed a wonderful retirement.”

Like the other great Hall of Champions horses that died in retirement at the park, Da Hoss will be buried in the Memorial Walk of Champions.