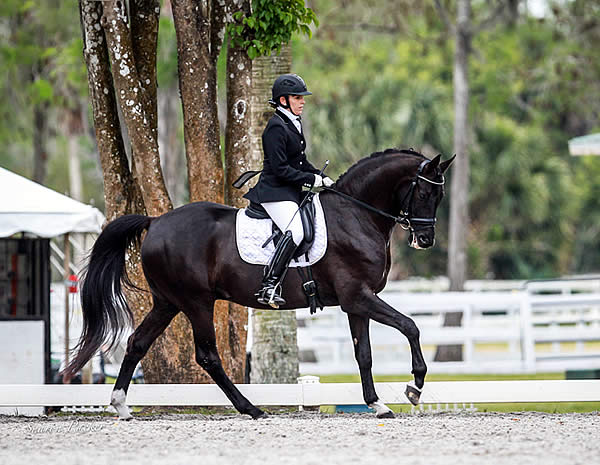 Heidi Degele and her mount Don Fredo competing at Welcome Back to White Fences IV. (Photo courtesy of Heidi Degele)

Wellington, FL (April 17, 2013) – Preparedness paid off for Heidi Degele, whose road to success has been one way, through hard work. With a full-time competition stable she runs located in Loxahatchee, FL, former Michigan resident Degele finds her stride training horses and students to achieve high scores while climbing the levels to the international stage.  There are two main goals Degele works towards for the 2013 USA Dressage season: one, qualifying for the Markel/USEF National and Developing Championships held August 21-25, 2013 in Wayne, Illinois, and two, helping her student Chloe Hatch climb the levels in the Young rider division.  Degele achieved both her goals during the first week in April 2013 at the Welcome Back White Fences III and IV competitions.

Riding Don Fredo (Don Frederico x Pik Bube I), owned by Greystone Equestrian LLC, Degele scored big in the 6-year-old test with an 82.000%, which was the high score of the show.  Degele said, “The ride was almost flawless.  I gave it my all and so did Don Fredo.  I went down the center line thinking I was going to ride perfect have not let the judges have anything to comment on and it worked.  The judges complimented and thanked me for bringing Don Fredo and only had positives to say, concluding that they see him as being a CDI horse in the future.” She trains with Lars Peterson regularly during the year and she watched him win the CDI 5* the night before the class.  She said, “Lars’ ride very much inspired me. I kept telling myself to ride like Lars.  Give it your all.”  With the goal of going to the Markel/USEF National and Developing Championships held August 21-25, 2013 in Wayne, Illinois, she said, “I think it is harder to qualify the young horse in Florida, considering our shows are earlier in the year and he’s not even technically 6 years old yet. The horses up north have an advantage given that they have more time to grow and age.  So, my goal was to get high enough scores to qualify and to pick my shows wisely.  I also showed him in a couple 3rd level tests to help prepare him for the 6-year-old test.  He is really a smart horse and learns things so quick.  He is also mentally very mature, so I am so happy for this success with him.  It’s my highest score ever.”

With Lakota, an 8-year-old American Warmblood owned by Mesa Farms LLC, Degele scored 65.58% Saturday and Sunday scored 66.69% in the FEI Developing Horse Prix St George.  Degele said, “My Goals for Lakota are to qualify for the Chicago Young Horse Championships.  I believe in this horse.  He has so much heart, more than any other horse I’ve ridden.  He loves to work.” With Both horses scoring high, Degele not only has qualified for the Illinois Championships, but by qualifying early in the year, looks forward to being competitive on the national stage for the United States of America.  Degele also rode Joanne Brooks’ 8-year-old Danish warmblood Lyric in the Third Level Open division to scores over 68%.  Lyric, who came from Canada to train with Degele for the season, made his debut at Third level with Degele who praised the horse’s work ethic and trainability.

Proud of her student Chloe Hatch who rode Slogan to a 60% in the Junior Team Test on Saturday, Degele said, “I am very proud of Chloe.  These are hard tests and hard competition.  She has been sick and Slogan actually had fractured his leg about a year and half ago.  So the fact they are competing at this level is such a huge accomplishment.”

Degele also competed the 12-year-old Hanoverian mare Ratina, who is by Rotspon and owned by Kristi Bloom.  The pair scored a 69.2% in the Third Level Test 1 Open division.  Degele stated, “This is another sales horse; I wanted her to have a current show record and in fact I ended up selling this wonderful mare 4 days after the show. I was so very proud of her.  She didn’t put a foot wrong and was happy to show off in the ring.”

With Kresjan, a 12-year-old Danish Warmblood by Lanskoy and owned by Claire Liang, Degele scored 66% in the Open Prix St George division to win the class, an impressive move since this was the horse’s first time being shown by Degele.  Degele said, “I just wanted to give this lovely horse a show record in the US.  He was successfully shown in Europe, and is a great horse, super easy and push button.  We are very proud of him.”

Degele wants to give a special thanks to Custom Saddlery for being such a great sponsor throughout the years and to help her achieve the 2013 path ahead.  With the strong scores, 2013 will prove an epic year for team Degele.