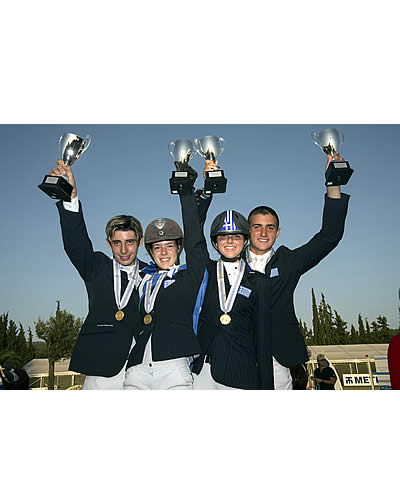 Halkidiki, Sithonia (GRE), 9 September 2014 – There was an air of celebration about the FEI Balkan Jumping Championships 2015 where Greece and Turkey were dominant and Bulgaria also got into the gold-medal-winner’s circle last weekend. Staged at Porto Carras in Halkidiki, Greece, the four-day fixture attracted a strong entry of athletes from seven nations who battled it out for team and individual titles in Senior, Young Rider, Junior and Children’s competition.

At the 2014 Championships in Zagreb, Croatia, there was a significant swing away from the traditional dominance of the Greeks and Turks, but normal order was restored this time around and, once again, Turkey earned the Senior team title along with individual gold and silver.

The Senior action began with victory for the Greek partnership of Elina Dendrinou and Carett in the opening Speed event. But Turkey’s Yusuf Cem Kayacan was only 0.6 seconds behind when runner-up with Abner, and this pair would go on to top the individual podium.

The Romanians lost their grip in round two, however, when adding 12 more to their tally while the Greeks matched their first-round result of eight faults to leave them on total of 16. It was three great second-round clears, from Sezek, Karagülle and Ince that clinched it for Turkey who added nothing to their first-round effort.

The veteran Karagülle is no stranger to success in these Championships. “I won individual gold in the Junior category back in 1979 in Athens when I was 16 years old, and I participated in many Balkan Championships since then and won several team and individual medals. I’m an amateur rider and I’m very happy to be able to still compete and win the Senior individual silver medal today. Porto Carras is an excellent place to organize a show; we all competed also in the CSI last week and enjoyed sun, sea and show jumping. Many thanks to the organisers. I hope to come back here again in the future,” said the 52-year-old rider.

And he put the icing on the cake when lining up behind fellow-countryman Kayacan on the individual podium while Romania’s Ionel Bucur took the bronze. Newly-crowned individual champion, 22-year-old Kayacan, said, “This is my first time representing my country at senior level and it’s a great feeling to claim individual gold. It’s impossible not to be happy! Abner is such a fantastic horse – I’ve been riding him for three years now and he gives me one-hundred-percent every time we compete!”

Greece also got off to the perfect start in the Young Riders division when Anna-Maria Papageorgiou and LC Waikiki Akino pinned Talya Afyoneri and Wervelwind into second spot and another of the Turkish contingent, Ece Kitis with Cassitano, into third in the first individual qualifier. But the Turks had it all their own way once again in the team competition in which Greece took the silver and Romania the bronze.

And their victory was all the more creditable because Turkey fielded only three riders, Afyoneri and Kitis joined by Necdet Kaan Karagülle (Campari) to post a 16-fault score first time out, but producing a clear-cut win when adding only four more at their second attempt.

The form held through to the closing stages when Afyoneri and Karagülle took individual gold and silver for Turkey ahead of bronze medallist Papageorgiu from Greece. It wasn’t the first Balkan individual title for 19-year-old Afyoneri, but it was a very special one. “Winning is a great feeling… I am so happy to be the Young Riders champion, both in team and individual! And also, being the champion for the second time after three years make me, my family and my trainer so proud! It is difficult to explain our feelings. I couldn’t do this without them and of course without my horse, Wervelwind. Being a part of this kind of an organisation is fantastic. Thanks to everyone who has shared all this with us,” she said.

Bulgaria’s Izov Ventsislav and Exop threw down the gauntlet with a brilliant win in the opening Junior Speed event and never looked back. From a starting field of 33, the pair scorched home in 73.42 seconds to pin Georgios Velonis and Vivendi Colt and Nikolina Makarona and Arce de Triomphe from Greece into second and third places, and then came out to jump double-clear in the team competition before taking the individual Junior title.

A total of six nations lined out for the team event in which the Greeks took early control with a zero first-round score and clearly clinched gold when adding only four faults second time out. Ioli Mytilineou and Ascot jumped double-clear for the winning side, and with Makarona, Alexandros Kokkonis (Oscar de Semilly) and Konstantinos Evangelos Papathanassiou (Secret Prince) also producing one clear performance apiece it was a polished performance from the new champions.

Another double-clear in the Junior Grand Prix left Bulgaria’s Izov in fifth place in the competition but with the individual Junior gold medal in his grasp, and it was Croatia’s Nina Madirzaa and Calysta who lined up in silver medal position here ahead of the Greek partnership of Grand Prix winners Nikolina Makarona and Arc de Triomphe who earned the bronze.

In the Children’s category, Turkey’s Osman Ata Vanli won the opening Speed competition with Demi Dostara ahead of Romania’s Alexandru Ghita and Paula in second and Aikaterini-Ellas Lemonidi (Quetcha de Chenee) and Anna-Sophia Danalis (Con Top) in third and fourth for Greece. That early result would prove pivotal for Danalis who emerged to take the individual title four days later.

There were four nations in contention in the Children’s team competition, and the Greeks proved untouchable when posting a zero score in both rounds. Both Danalis and Selini Popp (Saigon) jumped double-clear, and when Ioanna-Maria Tsochas was foot-perfect first time out with Brilliant Go and Paola Martin and Cobbydor were likewise in the second round it was a done deal.

Children’s champion, Danalis, put the 2015 event into perspective. “This year’s Balkan Championships in Porto Carras were amazing for me. The Greek children’s team won the gold and I also won the individual gold. The Balkan Championships are a very nice opportunity for the countries in the Balkan region to get together and compete. The Championships really help those who want to practice for European competitions. It’s an amazing experience that will never be forgotten!” said the talented 14-year-old.