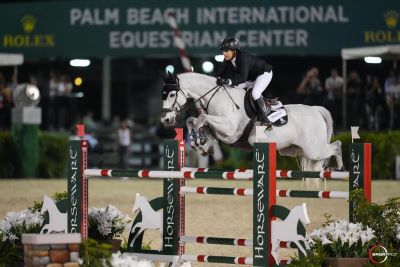 Forty-five entries from 14 nations across the globe contested Michel Vaillancourt’s (CAN) opening course. His challenge for the riders included two double combinations, a triple combination, and a triple-bar early on at obstacle three. The first clear-round came as the fifth rider on course, Ashley Vogel (USA), produced a top ride aboard Madiba AG Z. Two horses later, Sweden’s Petronella Andersson put in her bid for the top title and ensured a jump-off. As the class neared its halfway mark, the field of returning riders grew with Mark McAuley (IRL), Lillie Keenan (USA), and Ben Maher (GBR) adding their names to the coveted list. Belgium’s Abdel Saïd put forward a heroic effort to repeat his winning performance in the WEF 9 grand prix but tipped just over the time allowed of 83 seconds and incurred a single penalty.

A final tally of 10 world-class pairs set the stage for an exciting jump-off across the evening’s final short course. Vogel led the charge but would not see the top of the podium as she accrued four faults. Andersson was the first to put in a successful double-clear, but McAuley was quick to up the ante. The night looked to be in the bag for the Irish as McAuley sat in second and Conor Swail put in a blazing round as the second to last to go into the lead, but Kraut and Confu clearly had other plans as the last to go in the jump-off.

The duo proved they are never a pair that should be counted out. Kraut and the 15-year-old Holsteiner gelding (Contact Me x Cambridge 8) exploded into action, finishing with a final time of 36.44 seconds.

The luck of the Irish was clearly still strong during the penultimate day of the Horseware Ireland week as both Swail and McAuley joined Kraut in the lap of honor. Swail once again locked in the honors of the runner-up position, this time with his own 13-year-old Selle Francais gelding Vital Chance De La Roque (Diamant De Semilly x Rivage Du Poncel) after flying over the final fence in 37.10 seconds.