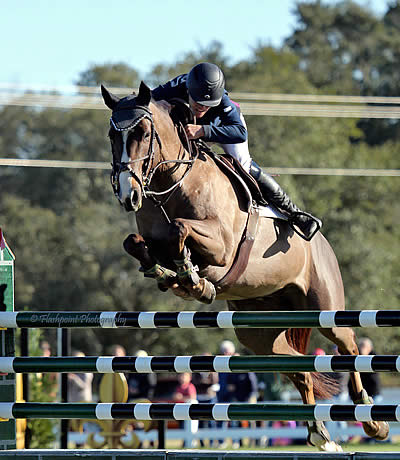 Gulfport, Mississippi (February 18, 2013) – Twenty two horses took to the pristine grand prix field under sunny skies for the $35,000 Adequan Grand Prix yesterday to close out the Gulf Coast Classic’s National Week.  A packed VIP tent and crowded bleachers watched the horse and rider teams from across the country tackle the course designed by Paul Jewel of Lambertville, New Jersey.  But it was Triompf, owned by Loretta Patterson and ridden by Holly Shepherd of Grand Bay, Alabama, who would be welcomed to the winner’s circle.

A personal triumph, yesterday was grand prix rider Holly Shepherd’s first time back in the grand prix ring since she broke her ankle!  And Triompf did not disappoint!  “He is the most incredible horse,” said Shepherd.  “To ride this horse is better than life itself!” she added exuberantly.

Of the twenty two horse and rider teams that tackled the course, only seven would find themselves qualified for the jump off.  The jump off field had Holly Shepherd and Triompf up against Friday’s Open Welcome Class winner Devin Ryan and the Genn men, Wilhelm and Theo, who won first and second in last week’s $25,000 Johnson Horse Transportation Grand Prix.   After a clean first round time of 102.459 seconds, Wilhelm Genn of Lebanon, Ohio and Palim Palim ***, owned by Nancy Gooding of Larkspur, Colorado, were first to go in the jump off and made it clean, setting the time to beat at 48.132 seconds.   Son Theo Genn of Lebanon, Ohio, riding Paradox, owned by Thomas Bruinsma of Ada, Michigan, posted a clear first round with a time of 100.660 seconds and followed his father in the jump off.  While he posted a faster time of 44.141 seconds, the eight jump faults the pair incurred would put them in seventh place overall.

Wilhelm Genn followed his son Theo, this time riding his own Happy Z.  Although the pair finished their fault free first round in a fast 98.933 seconds, the jump off round found them with four jump faults and the fastest time of 43.123 seconds which would find them in sixth place overall.  Theo Genn was up next aboard his own Cola, and after posting a clean first round of 101.846 seconds, set the new time to beat for the jump off at 46.081 seconds.  That lead time would be temporary though as Devin Ryan, of Long Valley, New Jersey riding Barbara Rowland’s No Worries, delivered a fast, clean jump off effort in the time of 45.284 seconds, but with Shepherd on deck, his time would eventually put him in third position.  Holly Shepherd was next to go and after her first round time of 103.177 put the pedal to the metal for the jump off and went clean and fast with a time of 41.990 seconds.  But, Theo Genn still had Winchester, owned by Bridlebourne Stables, LLC, in the wings and although he posted a fast first round in 103.561 seconds, his jump off round of 43.382 seconds would not be fast enough to catch Shepherd and subsequently placed him in second overall, handing the win to Triompf. “I wasn’t sure my horse could beat the Genns’,” commented Shepherd. “They are super hard to beat and an amazing group of riders,” she added.

“I’m thrilled,” commented proud owner Loretta Patterson. “This was the first grand prix Holly and Triompf have been in this year since she hurt her ankle.  I’m heading to our home in Scottsdale this Thursday, so it was so great to watch Holly ride him to a win for us while we were here,” she said.

Patterson, from Omaha, Nebraska, owns 28 horses and said that she has half of them on Adequan.  “It’s a great product,” she said, “and we appreciate their support of the Gulf Coast Winter Classic Shows!” she added.

“The footing was really good today,” said Shepherd, “The new grass is so thick and lush and when it comes apart, it reseeds itself in a couple of days.  It feels really great.   I think this is the best field in the country to ride on.  It is beautiful to look at and absolutely beautiful to ride on,” she added.

The good times continue to roll at the Gulfport Winter Classic!  Even though today is a non-show day, all adults attending the Gulf Coast Winter Classic are invited to attend a Happy Hour hosted by sponsor Island View Casino at 3300 West Beach Boulevard from 5:30 to 8:00 pm tonight! Complimentary drinks, hors d’oeuvres and live music in The View Bar and afterwards, stay and play or try out some of the other restaurants.

The Gulf Coast Classic in Gulfport is where the fun will be this winter, so don’t miss it!  Remember, even though Mardi Gras in neighboring New Orleans officially ended this week, the fun keeps rolling on and that festive atmosphere spills onto the show grounds. With its close proximity to the Gulf Coast beaches, class offerings, prize money, and social scene, the Gulf Coast Classic Company’s Gulfport shows are a must on everyone’s show list.  The show will feature weekly $2,500 USHJA National Hunter Derbies, the $10,000 International Hunter Derby Week V and a weekly Grand Prix, to name a few highlights.  The grand prix schedule continues next week with the $35,000 Nutrena Grand Prix on February 24, the $35,000 CWD Grand Prix on March 3, and the circuit grand finale, the $50,000 Budweiser Grand Prix, scheduled for March 10.