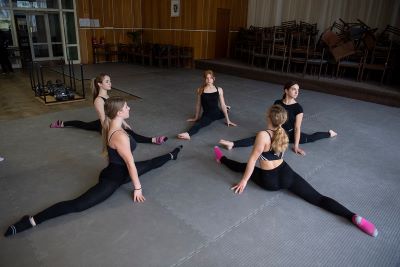 Polina Shovkova (14), sisters Katya (14) and Jenya (11) Panasenko, Sonia Shulga (14), and Marta Lopaienko (15) became the first team to ever represent Ukraine in international Vaulting when they participated in the one star competition in Kaposvár (HUN) from 20 to 22 May.

The team’s participation in Kaposvár came just a few short months after fleeing their hometown of Poltova to escape the war that has upturned the lives of millions of Ukrainians. They are currently living and training in Bernolákovo, a suburb of Bratislava (SVK), where they have been welcomed by members of the local Vaulting community and supported financially by the International Equestrian Federation (FEI) Solidarity Fund.

“We didn’t have competitions in Ukraine because we are the first Vaulting team,” Marta explained.

“We didn’t feel too comfortable with the horses here in Slovakia at first because they are bigger and have a different rhythm to our horses at home. But now we know the character of each horse.

“We were a bit worried about taking part in our first international competition and it was important for us. But as Katya, our trainer from Ukraine, always says: ‘You have to do this performance just for you.’”

Joining the Vaulters on their sporting journey is 29-year-old Anthony Bro-Petit, himself a former international competitor for France, who has played a key role in developing the sporting infrastructure for Vaulting in Ukraine prior to the war.

“Preparing young athletes for a competition or a Championship is always tough because even when they are motivated, the mental focus is very hard to maintain. The war has added an extra layer of mental difficulty for these girls. It’s not easy to fully concentrate on your training when you know your family is not safe.

“The girls are still very young, and it is hard to know how much I can push them during their training session. But this is a good learning experience for me. I’m still learning as a coach and I have to develop my skills.

“We would have been able to prepare more if there was no war. But the team did really well in their first international competition and now we know which aspects we need to focus on more during our training.”

With their competition experience in Kaposvár under their belt, the team now have their sights set on the international Vaulting competition that will be held in Samorin (SVK) next month. The road ahead will be easier to navigate than the one they took in March this year.

“We knew that we would have to leave Poltava about a week before we had to go,” said Marta. “We first thought that we were going to France, but two days before we left, we were told that we’re going to Slovakia.

“We were on the road for three days. It was a very long journey, because of the traffic jams everywhere. It usually takes us one day to drive to the Slovak border.

“The first night we didn’t stop and we kept going. But the second night we stopped near the Carpathian Mountains, and we stayed in a flat with just two rooms. There were 15 of us, and the girls and I slept on one sofa, and the others slept on the floor. Then the third day we crossed the border very quickly. We thought it would be slow with all the traffic, but we crossed over very fast.

“We were not frightened, but we were really sad and tired. And when we crossed the border, we all started to cry.”

The girls’ trainer Kateryna (Katya) Andreiva and her 18-month son David, as well as three mothers, have accompanied the Vaulters to Slovakia, while other members of their families have all stayed back in Ukraine.

It is a situation that has caused Katya’s and Jenya’s mother Ekateryna a great deal of anguish. “When you first come from war, you think that it would have been better to stay at home because your mind cannot feel safe,” Ekateryna said.

“It’s harder to be in a safe country because you feel at fault for leaving your family. My mother is in the Kharkiv region and I know that she’s sitting in a bomb shelter while I’m here in Slovakia. But we are mums and everything we do we do for our children. You don’t think about yourself. You just think about your children.”

The Vaulters have settled into a routine at the local school, which is currently housing the group from Poltava, as well as 40 refugees from other parts of Ukraine. The girls begin each weekday morning by joining online lessons with their school in Poltova, which leaves them the rest of the day to train at the local riding school, and at the school gym that has a mechanical horse and barrels.

“It is good to see that the girls are training really hard,” said the Secretary General of the Slovak Equestrian Federation Zuzana Bačiak Masaryková.

“The community here in the Bratislava area have been extremely generous to the team. The owner of the shop that sells Vaulting shoes has given the girls free pairs, and other people have provided us with everything they require.

“My aim is to give these girls all that they need to train, so that they can forget about the war, at least for a few hours each day.”

The Vaulters and their mothers still hope that they can return home to Poltava after the competition in Samorin (SVK) that will take place from 9 to 12 June.

Until then the girls are determined to continue their training. “We are not sure if Vaulting is our sport in the long term,” Marta explained. “But in 2023, our aim is to take part in the Vaulting World Championship and we’re going to train hard for this.”