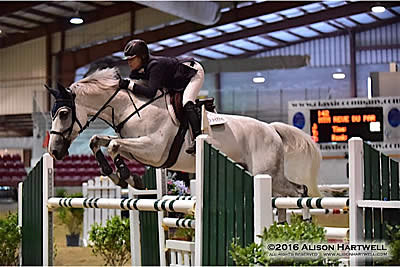 Allen Rheinheimer of Zionsville, Indiana, Technical Coordinator for the 2015 World Cup Finals and the Classic Company show jumping events, designed the course with a first time allowed of 92 seconds. Several had rails and according to Fenney, “The most challenging jumps in the first round were the skinny, the CWD and 7 B was awkward. Jump 11 came down the most because it looked like a simple vertical and the riders thought it was no big deal. They would cut the corner and the fence was on an awkward angle,” she added. “A lot of horses hit that one,” she said. Of the twenty-four horse-and-rider teams, nine advanced to the jump off round.

The jump off round was set with a time allowed of 49 seconds and Fenney and MTM Farm’s MTM Full House were the first to go in the lineup, going clear and setting the new time to beat at 40.218 seconds, putting the pressure on the eight left to go. “He’s a winner,” commented Mike McCormick. “We haven’t had him long. He’s only seven and we got him last December. He jumps long in the leg and you wouldn’t think he jumps well, but he jumps very high and he’ll never rub a rail,” he said. “He’s an outstanding horse,” he said. Fenney commented, “I just jumped him nice and easy, looking to go clear.”

Cassandra Kahle of Califon, New Jersey in the irons of Redfield Farm’s Wall Street looked to beat Fenney’s time, but four faults in a time of 37.713 would see them finish in fourth overall.

Fenney returned to the arena, this time in the irons of MTM Farm’s MTM Reve Du Paradis. Known for their speed, the pair went clear in a time of 37.387 seconds and took the lead, putting the pressure on the next four to go.

David Jennings of Franklin, Tennessee and Masie Mcswain’s and Full Circle Farm’s Blue Moon 22 followed, but four faults in a time of 38.758 seconds would have them finish in fifth place.

Francois Lamontagne of Saint Eustache, Quebec, Canada and his own Chanel Du Calvaire, winners of the Week I $35,000 Crescent Grove Advisors Grand Prix, followed Jennings. The pair had a heartbreak rail at the last fence and with four jump faults in a time of 38.801 seconds, would finish in seventh place overall.

Douglas and MTM Farm’s MTM Axel followed Lamontagne in the order and also had a rail at the last fence and with four jump faults in a time of 38.885 seconds, would finish in eighth place.

Kahle and Redfield Farm’s Tequilla Girl followed in the order. Four jump faults in a time of 37.636 seconds would make them the fastest four fault round in the jump off and place them third overall.

Amanda Flint of Long Valley, New Jersey and the Coverboy Group, LLC’s Eldorado VDL sat in the enviable last to go spot, but four jump faults and four time faults in a time of 50.372 seconds would find them finish in ninth place overall, securing the win for Fenney.

Fenney commented, “I don’t know why the horses had jumps down in the jump off round. The 7 A B combination was kind of hard and you did need to have a horse with a lot of scope getting in and getting out of that,” she said. “And I saw some of the riders get a little lost to the last fence,” she said. “They would take the blind turn to it and it would come down,” she added.

“I just rode the course to go clean, like I did with Full House, but Hans [MTM Reve Du Paradis] is eleven and just has so much more mileage, that he is just quicker and sharper at everything he does,” said Fenney. “He turns tighter and everything he does, he just does it faster,” she continued. “Mileage really factored into it,” she said.

“I think the footing in the indoor was nice,” commented Fenney. “As a matter of fact, right before the jump off, we realized that Full House pulled a shoe. It was too late to put one on, so we just did the jump off with the shoe off. The footing was that good,” she said. “One of the reasons we did the show here was to jump in the indoor since we’re heading to Omaha in a couple of weeks,” she said.

With Fenney’s top two placings on MTM Farm’s MTM Reve Du Paradis and MTM Full House, McCormick commented, “It was a great evening for MTM Farm. That facility is really nice,” he said. “The footing in the jumper rings was really good and the hunter rings were super,” he continued. “And the show management staff is excellent,” he added.

What’s next for MTM Farm’s Mike McCormick and Tracy Fenney? “We’ve been gone since the first of January. We are excited to get home!” said Fenney. “I was so ready to go home yesterday and I was trying not to think about it so I could stay focused. Mike says you can’t pack the trailer, ride and drive and do it all,” she laughed.