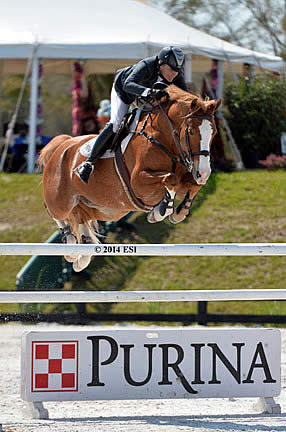 OCALA, FL (March 10, 2014) – The sun was shining bright over the Ocala Horse Properties Stadium for the $50,000 Purina Animal Nutrition Grand Prix, presented by Zoetis, as ‘big guns’, including Margie Engle, Rodrigo Pessoa and Stephan Barcha, made appearances. While riders jump to earn a spot in the Great American $1 Million Grand Prix on March 24, Tracy Fenney of Flower Mound, Texas earned a win on MTM Timon.

Forty-three riders attempted to best a course presented by designer Danny Foster of Milton, Ontario. The course was both technical and challenging, consisting of 13 obstacles and 16 jumping efforts. A long gallop from fence one to two followed by an oxer-vertical double combination proved a difficult line. But it was the line from a liverpool at fence six to the vertical-vertical-oxer triple combination at fence seven that ended many competitors’ hopes of advancing to the jump-off.

Eight horses qualified to return in the jump-off, which only produced two double-clear efforts. The first to return to challenge the nine jump-off fences was Fenney and MTM Centano. With three grand prix wins together this circuit, the most recent came on Friday. It was not their day, however, as they collected 12 jumping faults and a time of 51.83 second, good for eighth-place.

“Centano can be high-strung and sometimes tough to ride. Once he gallops full out, that’s all he wants to do. He was wound up from the start with the long gallop from fence one to fence three in the jump-off and he just wouldn’t settle after that,” said Fenney after the class.

It took four more trips before the first no-fault round established the Great American Time to Beat. After going 1-2 in last Sunday’s grand prix, the young and talented Jordan Coyne of New Port Richey, Florida again rode her speedster Lazaro, trained by Derek Peterson. Lazaro and Coyne put in a fast time of 50.30 seconds, but it only held until the next competitor.

No stranger to the winner’s circle, Fenney proved her mettle under pressure once again for MTM Farm in the irons of powerhouse MTM Timon. Fenney jumped MTM Timon fault-free in a hair-raising time of 49.44 seconds for her sixth grand prix win of the Ocala Winter Circuit.

Third place went to Quintus 66 and Daniel Damen of Ocala, Florida for owners Chuck & Dana Waters of Sparr, Florida with one time fault and four jumping in 58.25 seconds. Angel Karolyi of Aiken, South Carolina was fourth with the 11-year-old Dutch Warmblood Indiana 127, owned by Hollow Creek Farm. They had eight faults and a time of 54.72 seconds. Karolyi was also sixth with Hollow Creek Farm’s Amigo.

Christine McCrea of East Windsor, Connecticut rounded out the top five with Warmblood stallion Wannick WH for owner Candy Tribble with eight faults and a time of 57.40 seconds.

“Timon was just awesome again today. We gave him a day off on Friday and he was ready to jump today. He just loves to jump – it makes him happy,” said Tracy. “I thought the course was the toughest so far this circuit, but Timon was up to the challenge.”

For their win, Fenney and husband Michael McCormick were presented with one ton of Purina horse feed, courtesy of Purina Animal Nutrition. “They’ll deliver to Texas – that’s great,” exclaimed McCormick.

Grand prix action continues this week as HITS IX, the Ocala Celebration, features the $25,000 SmartPak Grand Prix, presented by Zoetis, on Thursday and the $100,000 Sullivan GMC Truck Grand Prix, presented by Zoetis, on Sunday. Next week, all attention will turn to the Great American Million, which debuts as the second jewel in the HITS Triple Crown of Show Jumping Monday, March 24 in the Ocala Horse Properties Stadium.

About Purina Animal Nutrition
Innovative research is the proudest tradition at Purina Animal Nutrition. No other national brand of feed has invested more time in research and understanding the needs of horses and their owners. An American original, the Checkerboard is one of the most recognized symbols in animal nutrition, standing for quality ingredients, in-depth research, and complete consistent animal nutrition. Learn more about how Purina can help your performance horses by visiting Horse.PurinaMills.com.