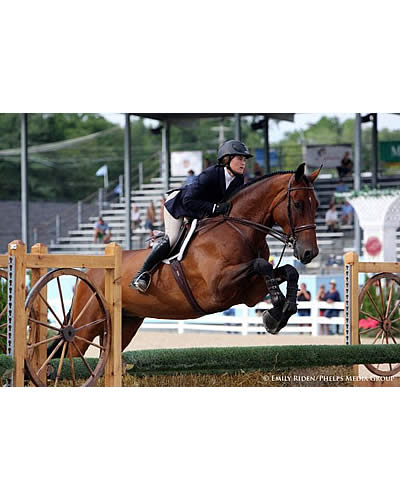 Devon, PA – July 6, 2015 – On Sunday, Tori Colvin was earning major jumper victories in Tryon, North Carolina. Fast-forward less than 24 hours and one drive through the night with her mother, and the 17-year-old from Loxahatchee, Florida was winning every class she was entered in at the 2015 U.S. Junior Hunter National Championship East Coast, hosted by the Brandywine Valley Summer Series.

Colvin arrived at the Devon Horse Show grounds, home of the 2015 Junior Hunter Finals, at 4 a.m. Monday, and by the end of the day she had claimed three victories, including an impressive win in the 2015 USHJA Hunterdon Equitation Cup Classic presented by Intermont Equestrian at Emory & Henry College.

A starting field of 76 entries competed over Skip Bailey’s first course in the unique class that combines the precision of equitation with the handiness of the hunters. Following the conclusion of the classic round, the top 20 riders advanced to the handy round.

At the end of the first round it was Ashton Alexander who held the lead position, having earned a first round score of 89 as just the second to go in the class, but in the second round, it was Colvin’s time to shine.

The handy course presented riders with a large number of options, including options for the directions from which they took the first two fences. Following the first two fences, riders were asked to move up to a strong hand gallop to the third fence before quickly being forced to collect to clear a skinny gate and continue over the six additional remaining fences.

Colvin and her mount, Dr. Betsee Parker’s Clearway, maneuvered a very handy, direct approach to the first two fences and turned in a beautiful trip that would shoot them to the top of the leader board with a score of 98 and a two round total of 186.

“Since I was coming in second, only by one point, we thought we should just go for it,” Colvin said. “We know he’s a very handy horse. We knew that once we landed [off of fence two] we could just gallop and go as fast as he can, and he collects easily for the gate. We made a plan for him in the handy, and it worked out well.”

Judge Jack Towell said, “I thought [Ashton Alexander] was one point better than [Tori Colvin] the first round, but the second round when [Tori] came in I was waiting on [her] do to that. That worked out perfectly, and it was over with after [she] did that. When you have a handy course, Ronnie Mutch always taught me, walk the handy-est then see what you can do. She knew she could do that.”

Alexander would hold on to a strong second place spot with a two round total score of 181. At the end of the handy round, the top ten were as follows:

Following the completion of the second round, judges were to bring back between four and 10 riders for a third round of testing. Judges Towell and Rachel Kennedy elected to bring back the top four to jump fences one through eight again but with a twist – they were asked to swap horses.

Hogue and Fath swapped, giving Hogue the ride aboard Fath’s mount, Carte Blanche, owned by Hillside Farm LLC, and Fath the ride on Hogue’s Wrigley. Alexander picked up the ride on Clearway, and Colvin rode Don Stewart’s Fernway Park. Each rider was given two minutes in the schooling ring and the opportunity to jump just two fences before going into the show ring.

Hogue and Fath both executed the first eight fences well, and it came down to Alexander and Colvin. Alexander was the first to come back, following receiving a little bit of advice from Colvin.

Colvin said, “I told her that he’s really tired, but he’s also really handy. His lead change she practiced in the schooling ring. That’s his only little quirk is his little hop through his change.”

Alexander handled the mount well, but she saw a long distance to the hand gallop fence and Clearway landed playful bucking off the other side. Then it came down to Colvin.

“In the second round, it just worked out where all you had to be was just careful enough,” Towell said to Colvin.

And Colvin was more than careful; she turned in another beautiful round.

“I don’t really know that horse – I hadn’t really watched it do the equitation,” Colvin said. “[Ashton] said to me that he’s kind of a bit sensitive, and he would probably buck after the jumps. I thought ‘let’s not use leg!’ When I got on him in the schooling ring, he felt sort of like a big pony. I love ponies, and I have a lot of experience with ponies, so when I went in there I sort of just marched along. You just march and turn him, and he was really easy for me to ride. So that was a fun ride to get.”

As Colvin cleared the final fence it was evident that the victory should be hers.

“You’re dealing with super stars,” Towell said. “It’s just nice to judge these shows. It’s an honor, and it’s fun. It was a lovely class to judge. All of the riders were great. I saw some really nice horses. It was a good experience judging.”

Third place went to Hogue while fourth was awarded to Fath, and Annabel Revers rounded out the top five.

“It’s always an honor to watch Tori, and it’s always an honor to watch Ashton,” Kennedy said. “It was my pleasure to pin that class today. It was nice to see kids and hear names that I haven’t ever heard before, beside Tori and Ashton and the usual top kids in the top ten. It was really, really nice and really good training and the kids were ready.”

Prior to her Hunterdon Cup victory, Colvin’s day had already gotten off to a winning start. Throughout the morning, junior hunter riders completed their classic rounds, which account for 40 percent of their overall Junior Hunter Finals scores.

Colvin topped both the $4,000 Small Junior 16-17 Classic and the $4,000 Large Junior 16-17 Classic. Colvin’s wins came aboard Dr. Betsee Parker’s Ovation and Way Cool, in the small and large division respectively. Other classic round winners in the 3’6″ divisions included Daisy Farish and Bill Schaub’s Carasco in the $4,000 Small Junior 15 and Under Classic and Emma Kurtz and Frederick, owned by David Gochman, in the $4,000 Large Junior 15 and Under Classic.

Riders return to the Dover Arena Tuesday morning at 7 a.m. to compete under saddle and over the handy round course. Under saddle scores will account for 20 percent of each horse’s overall total, while the handy round accounts for the remaining 40 percent.