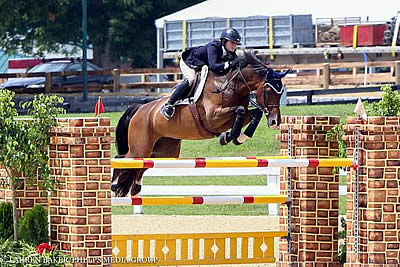 Tori Colvin and Chanel B.

Lexington, Ky. – Aug. 2, 2016 – Tori Colvin is back in Kentucky, and the young professional kicked off the Kentucky Summer Classic by winning the 1.40m Open Jumpers with her longtime partner, Chanel B.

Colvin originally took the lead on Take the High Road LLC’s Austria 2, going second in the class and setting the early time to beat at 65.749 seconds.

Her lead seemed unbeatable until Sharn Wordley entered the ring on Kerry Anne LLC’s Glamour Van De Kakebeek. Wordley sped past Colvin’s time by more than a second, finishing on a time of 64.032 seconds to become the new leader.

Colvin then returned second to last with Take the High Road LLC’s Chanel B, determined to regain the lead. After laying down a clear round and executing a number of tight turns, the duo managed to reclaim the top spot, this time finishing the course in just 62.322 seconds.

“Sharn was beating me,” Colvin continued. “And Chanel B has more experience and is really good at this height. She’s not the quickest, but she has such a big stride. Her stride and her turns really help her in winning speed classes.”

Colvin explained she has been riding the mare for over four years, and Chanel B was her High Junior Jumper mount of choice as she moved up the ranks to becoming a professional. Now 12, Chanel B still enjoys competing with Colvin in the Open division.

“I’ve done a couple of grand prixs with her, but she’s a woman,” Colvin explained. “She likes to go low sometimes and then go bigger. She loves the speed classes, too. She just zooms around.”

Wordley was not ready to surrender yet, however, and returned as the class’s final entry with Caiman De Sequoias to challenge Colvin’s lead once again. Despite turning in a clear effort and besting his first time, Wordley’s time of 63.527 seconds would only be good enough for second.

Earlier in the day, the 7-Year-Old Jumpers had the stage in the Rolex Arena, and it was Robert Mendoza and Allyn McCracken’s Java Van De Kleinheide who earned the win. The duo was the only ones to go double clear, cinching the victory with a time of 36.455 seconds.

“I work for Bannockburn Farm, and we imported Java last year to essentially be a broodmare,” Mendoza explained. “She has eggs harvested twice a year, but the rest of the time I get to play with her. She just started doing the 7-Year-Olds in the spring, and she’s doing great. She hasn’t shown since June, so it was really nice to have her be that eager and clean.”

The 1.35m Open Jumper followed next, and it was Blythe Marano and Balade Du Ry Z who came out with the win. Marano said she has been riding the 8-year-old mare for a year and a half now.
“Balade is extremely careful,” Marano said. “I think she’s going to be one that’s going to come up for me to do the bigger classes on. This whole year she has grown up a lot, and I was very happy with her today. She was right there for me.”

“I was very happy with how Cortes was today,” Gogul said. “The lines were more open than they were at our previous competition, so we made a bit of an adjustment between my rounds, and round two went even better! He is getting stronger and going better and better as the season progresses.

“Cortes is so brave and we have worked on getting him straighter and stronger because he is still pretty young,” Gogul continued.

Gogul of Cleveland, Ohio has been riding the 6-year-old Westphalian gelding for two seasons and he is thrilled with his progression. The pair will continue to show in Kentucky throughout August.

“I’ve been coming to the Kentucky Horse Park since I was 16 so it feels like a second home,” Gogul concluded.

“He is very scopey and jumps well,” Goguen said. “I’m so happy with today, the round was very fluid. He went beautifully.”

The pair competed together last year and they are no strangers to blue ribbons. He was reserve champion at Capital Challenge in the First Year Hunter Division. The 8-year-old gelding also competes with his owner in the amateur divisions and they were champions at Traverse City earlier in this year.

“I could not be happier with him,” Goguen continued. “I hope he performs tomorrow as great as he did today!”

The day wrapped up with the High Performance Working Hunters where Sydney Shulman and DK-USA Sporthorse’s Cosmeo won blue ribbons in both over fences classes and a second place ribbon in the under saddle class. Linda Radigan and Shangri-La Stables’ Geppetto won the under saddle class in the division. Shulman and Cosmeo won last week’s Visse Wedell Grand Hunter Championship in the professional division.

“I thought he was great,” Shulman said. “He jumped really well, but a bit more fresh than I would have liked for the first day. He was similar to our rounds last week because he came in today a little tense, but I thought he jumped better this round though. He gets better and better the more he goes. He is incredible!”

Shulman, 21, is based in Greenwich, Connecticut and she is appreciative of his owners for allowing her to ride the talented 10-year-old Dutch Warmblood stallion who had experience competing in the 1.40m-1.45m jumper classes in Europe.

“They sent me a video of Cosmeo in November while they were looking to buy a horse in Europe and I thought ‘Oh he is an amazing jumper!'” Shulman explained. “When they imported him I was so excited they called me to be his rider.”

Though he has experience in the jumpers, Shulman believes he has found his calling in the High Performance Hunter division.

“I really like him as a hunter,” Shulman explained. “For me, he’d be a bit too slow in the air for a jumper; he gets too round and high to be very successful as a jumper, but he is great for the hunters. He likes his job and he keeps getting better and better. I am really looking forward to his future.”

In the Regular Conformation Hunter division, Molly Sewell and Jamie Stryker’s Upcountry Charmer won the first over fences round, while Tim Goguen and Belhaven Stables LLC’s Ransom won the second over fences round and the under saddle class.