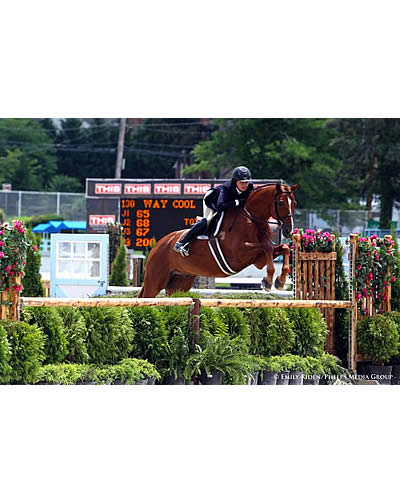 Devon, PA – July 7, 2015 – Tori Colvin came to the 2015 U.S. Junior Hunter National Championship East Coast as a widespread favorite to win aboard Way Cool and Ovation. Sophia Pilla came primarily just to have fun on her mounts CC Cool and Pop Rocks. But at the conclusion of the championship finals they are both going home with numerous blue ribbons, multiple division tricolors and ultimately, the 2015 national grand championship titles.

Colvin and Way Cool kicked things off Monday at the Devon Horse Show grounds with a victory in the Large Junior 16-17 Hunter Classic Round, with scores from the round accounting for 40 percent of each horse and rider combination’s overall total. On Tuesday, Colvin cemented her Large Junior 16-17 division championship by finishing third in the under saddle, which accounted for 20 percent of total scores, and winning the handy round, which made up the remaining 40 percent.

“He’s been good every time he comes here [to the Devon Horse Show grounds],” Colvin said of Way Cool. “I think this would be his favorite ring. He just goes in there, perks his ears and off he goes.”

While Colvin had a commanding lead of the division, with the reserve championship awarded to Victoria Press and Melissa Wight’s Satisfaction, Way Cool’s hunt for the overall grand championship was hotly contested by none other than Colvin’s second mount, Parker’s Ovation.

Ovation earned three wins, but he accumulated slightly fewer points than Way Cool – enough however to still claim the Reserve Grand Championship title, meaning both grand and reserve would be going home with the talented Colvin.

“I’ve been lucky enough to be a part of this team [with Colvin] for a little bit more than a year now,” trainer Andre Dignelli of Heritage Farm said. “I would have to say with a lot of confidence that Tori is probably the best hunter rider that I’ve ever seen. That’s a very, very strong statement.

“She had a great show, and my hat is off to her because there was not a lot of pressure on her. She could’ve played it safe in both handy rounds because the ones that went right before her had made a few errors,” Dignelli said. “It’s impressive to me that she’s still making all of the turns and stepping up and taking all the risks. Not only did she win, she pushed herself right to the end. I think that’s always exciting.”

Dignelli concluded, “I thought this was a very well run event. This is probably the best Junior Hunter Finals that I’ve ever attended. I thought that Skip Bailey did a great job with the courses, because I thought they were a little bit more difficult than we’re used to seeing. I like to see that at a championship.”

As Colvin did, Pilla also stepped up to the challenge of the Junior Hunter Finals, and she is going home with many ribbons and trophies to show for it.

In the California split 3’3″ Junior 15 and Under Hunters, Pilla claimed the division championships in both section A, aboard CC Cool, and Section B, aboard Pop Rocks.

“This is absolutely amazing,” Pilla said. “We just planned to have fun and do the best we could.”

“Pop Rocks is my equitation horse for the big eq,” Pilla explained of the 8-year-old Dutch Warmblood gelding. “We started in the hunters to get used to him. Then this year I started on CC, and he got qualified for here. They told us that we were also qualified on Pop Rocks from before when I was doing the hunters on him.”

“[CC Cool] does the 3’3″ pre-greens,” Pilla’s trainer, Lainie Wimberly of Brigadoon Show Stables, said. “We were extremely excited for her to do so well, being such a young horse. She didn’t mind the atmosphere or the rings or the jumps. She was beautiful. She held it together really well.”

Pilla added, “She felt great. She was listening; she was happy; she was just perfect. I love this show. It’s so pretty, and it’s so much fun. It’s a great set-up.”

In addition to CC Cool’s grand championship title, she was also presented with the Best Mare award and the War Dress Memorial Trophy as the leading horse owned by a junior rider.

Reserve championships in the 3’3″ Junior 15 and Under Hunters went to Carly Hoft and Buffalo Therapeutic Riding Center’s Hey Sailor in Section A and Tabitha Brown and her own Quirrell in Section B.