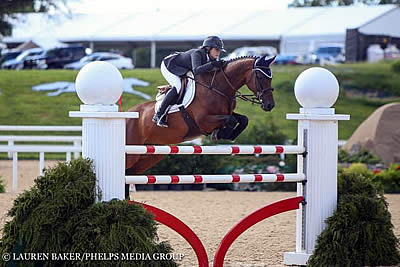 Lexington, KY – Aug. 21, 2016 – Before she heads to the Hampton Classic on Monday, Tori Colvin snuck in one more victory aboard Take The High Road LLC’s Cafino in the $40,000 Bluegrass Festival Grand Prix, sponsored by Audi of Lexington, on the final day of Bluegrass Festival Horse Show.

“This is my favorite week because the course designers bring the cool jumps out,” Colvin said. “It’s amazing to win on Cafino. I knew he was ready today, so I was really going for it out there. I’m really happy to have him going so well. Karen [Long Dwight] has been the one who helped us with him, and she’s the sponsor and the owner. She’s wonderful, and Cafino is just perfect.”

Bobby Murphy’s course still contained many elements from last night’s USHJA International Hunter Derby Championship, including the obstacle that certainly stuck in most riders’ minds: the 1.57m wall, which was set at 1.54m for the grand prix.

“The only thing I thought was just stay on at the wall, and I’m good,” Colvin laughed. “That’s it; just hang on. I loved having the wall out there. I loved this course because it was like half hunter derby and half grand prix.”

Murphy’s hunter-esque course saw 37 entries in the first round, with six entries eventually advancing to compete over the short course.

Among the jump-off-qualified horse-and-rider combinations was Shane Sweetnam and Main Road, who is owned by Sweet Oak Farm and Seabrook LLC. After a second place finish in another grand prix during the Kentucky Summer Horse Show series, Sweetnam said he was looking for a win aboard the gelding.

The duo came close, turning in the first clear round of the afternoon and setting the early time to beat at 41.775 seconds in the jump-off.

“Main Road is a very good horse,” Sweetnam said. “He’s only 8; he’s had a good summer. It was a difficult course, but I think he jumped really good in both rounds.”

It was not long until Colvin and Cafino overtook their lead, however, turning in a fast round and tripping the timers in 41.23 seconds. Colvin’s lead would hold out for the win, while Sweetnam settled for second.

“I could’ve been maybe a bit quicker turning after the double,” Sweetnam said. “I think it would’ve been harder for them to beat me if I had turned quicker. I think that’s what cost me the win. He’s still learning.”

Colvin said she began riding Cafino about a year ago, and she loves the soft, easy ride the gelding gives her.

“Cafino is the easiest thing to ride,” Colvin explained. “You literally just loop the reins. When he lands, it’s like you’re on a cloud. He’s perfect. He doesn’t land hard, he’s just soft. He has a little quirk, because he will buck when he gets a little excited, but I just have to hold on.”

A final challenger, Sloane Coles, piloted the Spring Ledge Group’s Esprit to the third place spot with a clear round completed in 43.573 seconds. Clocking a faster time, but unfortunately picking up 4 faults in the jump-off, was Sweetnam and another entry, Spy Coast Farm LLC’s Chaqui Z. Fifth place went home with Blythe Marano and Virginia Ingram’s Figeac De Reve with 4 faults and a time of 44.007 seconds. Aaron Vale and Sarah Turner’s Acolina R turned in another very fast round in 43.267 seconds, but unfortunately lowered two heights to finish on 8 faults and in sixth place.

It was the 20-year-old, newly-turned professional rider, Geoffrey Hesslink, who took home not only the blue ribbon and championship cooler for Sunday afternoon’s $5,000 Hallway Feeds USHJA National Hunter Derby, but also for the entire Hallway Feeds Hunter Derby Series. Saturday’s derby marked the last leg of the popular series, held during the Bluegrass Festival Horse Show at the Kentucky Horse Park.

Hesslink piloted Garland Alban’s Esco to victory, after receiving an 89 in the classic round and an 83 in the handy, collecting a lead score of 172 points to seal the win. He successfully tackled three high-option fences. While Hesslink has competed in the Alltech Arena more times than he can count due to his illustrious equitation career as a junior, it was Esco’s first time in the intimidating indoor arena.

Hesslink, of Shelburne, Vermont, said, “I started riding Esco post-circuit at the Winter Equestrian Festival this year. He’s been great. He does the Performance Hunters and the derbies. He’s been perfect.”

Hesslink enjoys participating in the Hallway Feeds National Derby Series so much that he has not missed one this year. “I love the derbies because I feel like it’s a great place to show off your horse and your handiness as well as how smooth and soft you can be,” Hesslink said. “Esco really excels at it because he doesn’t care about any of the jumps. He never spooks at anything.”

Although it was Esco’s first time in the large indoor venue, and their partnership is fairly new, Hesslink was not concerned about the 8-year-old Rhinelander.

“I know he’s always a steady eddie and he doesn’t care about those things. For sure, it’s more spooky. There’s more pressure on the horses with this atmosphere,” Hesslink acknowledged.

Hesslink has made a smooth transition into his budding career as a young professional under the guidance of Tim and Kelly Goguen of Boggs Hill Farm, as well as the generosity on behalf of Dina Testa and Garland Alban.

As the winner of the Hallway Feeds USHJA National Hunter Derby Series, Hesslink took home the $10,000 Hallway Feeds Leading Rider Bonus. “I think it’s amazing,” said Hesslink. “I think that it really helps to advertise and get the name out there for the derbies and I think it drives people to want to do them more and participate. I know Taylor [Kain], Aaron [Vale] and Sydney [Shulman] all came back and wanted to do them again and I did the same. I think it’s a great program and it’s a good thing for people who are here.”

Earning second place honors in this weekend’s derby was Courtney Baggett’s Highmark, ridden by Amanda Dougherty. She took on three high options and judges awarded the pair with an 82 in the classic and 85 in the handy. Tori Colvin rode Rivercross Onyx, owned by Rivercross Farm, to third-place honors with a total score of 167.5 points.