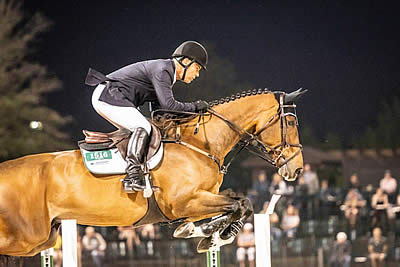 Mill Spring, NC – May 22, 2018 – Jimmy Torano of Wellington, FL and Glasgow de Muze stole the show in the $25,000 Marshall & Sterling Grand Prix on Saturday, May 19, dashing through the short-course timers in 37.968 seconds to claim top honors, besting a field of eighteen entries. Sarah Bagworth of Toronto, ON and her own Malou took second place, navigating the jump-off track in 42.655 seconds, while Torano once again rounded out the podium aboard his own Day Dream, finishing their second round in 36.878 seconds with an added four faults.

The course, set by Catalina Cruz (MEX), saw only five of eighteen pairs return to test the jump-off track. Torano had three mounts entered, and noted that piloting multiple rides had its advantages in the jump-off.

“I knew that there were only five in it and I had a couple behind me. Celso [Ariani] is very fast and I knew I had another ride last in the jump-off, so I thought I’d really take a shot with my first horse [Day Dream]. I got into a little trouble turning back on the double.”

“When Sarah went she played it smart. She went for a slow clear, but forced me to jump clear and be faster than her. I kind of stuck with my original plan. I went for the win and went fast. I figured that in the worst case, I would have one down and come in second, and best case I wanted to make sure that if I went fast enough I’d win the class.”

Of the course and his plan for the three mounts, Torano explained, “I went second in the order and I stuck to my plan. After the double oxers on the far end of the ring, the seven strides got very steady with a few people ending up going six strides. I stuck to my plan with all three horses and it worked out; I was first and third so I can’t complain. It really worked out well for my horses.

“The course rode nicely tonight. I thought the designer did a very nice job for the field she had here. There were only five clear out of 18, and I’m sure it was tough to build when she didn’t really know the group of people she was going to get. I thought she did a really good job,” concluded Torano.

Earlier in the week, Torano also galloped away with both first and second place in the $25,000 Welcome Grand Prix on Thursday, guiding Day Dream to first with a jump-off time of 36.202 seconds and Ilan Ferder’s Glasgow De Muze to second place after finishing the short track in 36.245 seconds. Nicole Bellissimo rode Bellissimo LLC’s Jersey V.D. Hunters to third place honors after crossing the timers in 38.169 seconds, with 17 entries testing the course in total.

Torano has been piloting Day Dream since the horse turned seven, but has only had the ride on Glasgow for a few weeks. Tryon Spring III was the pair’s first time in the competition ring together. He explained, “Oddly enough, that’s a horse [Glasgow] that I do not know at all. The Grand Prix was only the second class I’ve ever ridden him in. He belongs to a very close friend of mine, Ilan Ferder, who called me last week and said, ‘I’m going to send you a horse to ride.’ I owe him a lot, and a huge thank you to Ilan for believing in me and trusting me with that horse. So far, we’ve had great success with him. A good start.”

As Torano rounded out his third successful week at the venue, his original plans have shifted. “My plans were to leave after the conclusion of this week,” he said. “I changed all of my plans and I’m actually staying here for three more weeks. That’s how much we like it and how much our customers like it. I think that’s really the root of it. I love this horse show. I love the facility and the footing. There really is nothing to not like about all of it. I think that’s where success starts, when you’re happy to be in a place.”

Elizabeth Eaton of Bernville, PA and her own Herault championed the NAL/WIHS Adult Amateur Jumper Classic after completing their jump-off round in 35.951 seconds to beat the class. Diana Harris of Creedmoor, NC and her own Flair WS collected second place with a time of 40.438 seconds. Lily Bachofen of Raleigh, NC achieved third place aboard her own Seaside Riviera, rounding out the top three with a time of 40.764 seconds.

The $3,000 NAL 1.20m Low Junior Jumper Classic awarded the win to John Angus of Fort Lauderdale, FL and the Stephanie Angus owned Seacrest’s Calvin, with a jump-off time of 37.497 seconds. Jamie Buis of Wellington, FL and Bull Run’s Revelation, owned by Bull Run Jumpers Inc., were presented with second place after completing the track in 38.212 seconds. Faith Davis of Gurley, AL placed third with her own Dekadenz after riding through the fast track timers in 38.994 seconds.

Sarah Meyer of San Antonio, TX rode to victory aboard Cardentos J.W.B., owned by Don Meyer, in the $3,000 NAL 1.20m Low Amateur Jumper Classic after stopping the jump-off timers in 39.249 seconds. Arianna Tucker of Kannapolis, NC and her own Cludy took second place with a time of 40.591 seconds. Courtney Osborne of Marietta, GA and her own TY Boy earned third place after a jump-off round ending in 43.587 seconds.

The $5,000 NAL/WIHS 1.30m Medium Junior/Amateur Owner Jumper Classic was won by Manuel Fernandez Hache of Wellington, FL and Aristides Fernandez Zucco’s Kanisso, after crossing through jump-off timers in 37.742 seconds. Faith Davis of Gurley, AL and her own Cardiff CR earned second place with a time of 38.657 seconds. Judy Sutton of Maggie Valley, NC finished in third place with Win A Date after contesting the course in 40.384 seconds and with eight added faults.

The $10,000 USHJA International Derby saw Liza Boyd of Camden, SC guide the Finally Farm Inc.’s Clemens through two rounds in Tryon Stadium at Tryon International Equestrian Center (TIEC) Friday night, scoring 383 to take the lead ahead of 20 additional entries chasing behind. Holly Shepherd of Grand Bay, AL took second place honors aboard Triompf, owned by Loretta Patterson, with a score of 373, while Boyd also took third, riding Leonardo Aljure’s Easter to a score of 366. The highlight class of the World Champion Hunter Rider week showcased top hunter talent under the lights in the iconic Tryon Stadium, with a course designed by Andres Christiansen.

With 35 entries presented on the Derby Field at TIEC for the $10,000 USHJA National Hunter Derby, Sara Taylor of Sherborn, MA piloted Eight Oaks’ So Fun, to victory on a two-round score of 184, scoring 90 and 94. Wakefield, RI native Jennifer Hannan rode Cynthia Sulzberger’s Coeur de Leon to second place on a score of 180.5, and Mary Antonini of New Orleans, LA secured third place aboard her own MTM Making Waves, their two round score totaling 178.5.

Sadie Parker of Waxhaw, NC and Jump Forest Jump, owned by Parker, finished atop the USHJA Hunter 2’3″ Division ahead of Grace Mangrum of Milton, GA, who collected reserve champion with her own Josiahs Elegant Comet.