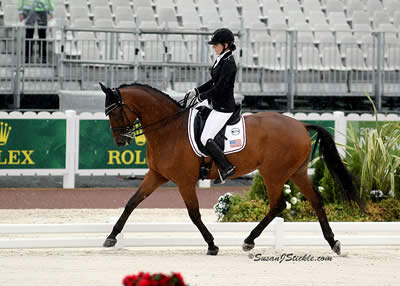 Angela Peavy finished tenth with Ozzy Cooper in the Grade III team test on a score of 65.421 percent. CREDIT: SusanJStickle.com.

CAEN, NORMANDY, August 25, 2014 – The USA got off to a strong start in day 1 of para-equestrian dressage competition at the 2014 Alltech FEI World Equestrian Games™.

First up was individual competitor Angela Peavy, 18, of Avon, Conn., who earned a tenth-place finish in the Grade III team test on a score of 65.421 percent. Peavy’s mount for the Games is Ozzy Cooper, an eight-year-old Trakehner gelding (Hibiskus x Arrak) owned by Rebecca Reno.

“It was great; he was a really good boy,” Peavy said of her mount afterward. “He was good, nice, and very focused. It was a very clean test.”

This WEG is Peavy’s first international competition, as it is likewise for her teammate Sydney Collier, 16, of Ann Arbor, Mich. Collier’s story – she is the youngest para-dressage competitor at these Games, and the International Equestrian Federation (FEI) fact-checkers are busy trying to confirm their hunch that she may be the youngest competitor in all of the disciplines at this event – has charmed the media, as have Collier’s accounts of her service dog, a white Poodle named (appropriately) Journey, who is the first dog to receive a proper WEG accreditation, credential and all.

Aboard Willi Wesley, a fourteen-year-old Hessen gelding (Wolkenstein x Kokoschka) owned by Victoria Dugan, Collier earned a score of 65.960 percent in the Grade Ib team test, which put her in thirteenth place.

“It was an incredible experience to be riding with such amazing other riders,” Collier said afterward. “For my first time, my horse was super-well-behaved, and thankfully I don’t get nervous, because of my stroke,” she said, referring to the incident that changed her life at age 11.

Support the Team and its future to the 2016 Paralympics in Rio with the USET Foundation’s Jonathan Wentz Memorial Challenge: http://uspea.org/the-jonathan-wentz-memorial-challenge/.

Learn more about the U.S. Para-Equestrian Dressage discipline or give a tax-deductible donation to support the development of the sport with the USPEA 501(c)(3)t: www.USPEA.org.