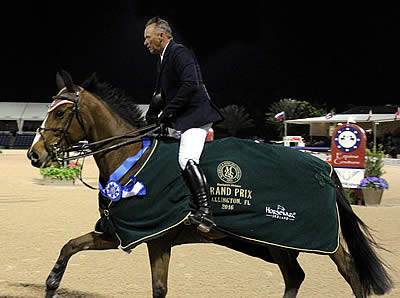 After sustaining an unfortunate groin injury during training in the fall, Minikus was forced to give himself and his line of elite horses a few months off. While the time off was hard for the dedicated athlete, he thinks his horses enjoyed their vacation. Minikus commented, “It probably was a blessing in disguise because now I have a very fresh horse.”

Minikus and Babalou 41, an 11-year-old Oldenburg mare (Balou du Rouet x Silvio I), have enjoyed much success which included a win in the 2015 Winter Equestrian Festival’s Lugano Diamonds $150,000 Grand Prix CSIO 4* and representing team USA to the win in multiple Nations Cup teams this past summer. “She was always a good horse,” Minikus stated. “She is very explosive with her jump and it took a while to get her to come down a bit. She always over-jumped too much, but we worked that out and here we are.”

Minikus is a sponsored rider on the Advisory Board for Draper Therapies, a therapy product company for equines, canines, and humans. Minikus and the other Draper Therapies Advisory Board members contribute to helping the company stay on the forefront of innovative, effective products by providing perspective from professional riders who are at the top of their sport. Draper Therapies is thrilled to have the Grand Prix champion standing behind their products, and works to support Minikus in his endeavors. Draper Therapies is especially proud to support Minikus and his big plans for 2016, as Minikus works towards accumulating enough wins to qualify for the United States Olympic Team that is headed to Rio de Janeiro, Brazil for the summer Olympics.

Becky Shipps of Draper Therapies commented on Minikus’ recent winning round, saying, “Todd is an exceptional rider who knows that maintaining optimum performance levels isn’t easy. Sprains and strains can happen to riders and horses. It is vital to listen to your body and the importance of fitness to keep rising to the bar. Todd is a superlative horseman, and we look forward to supporting him and his horses this 2016 Winter Equestrian Festival season.”

Draper Therapies offers therapeutic products that contain Celliant, which has been shown to effectively increase tissue oxygen levels in those who are in contact with it. Increased tissue oxygen levels can improve performance, speed up muscle recovery, and relieve pain. Overall, Celliant can improve the natural systems of the body. The Celliant-containing products that Draper Therapies provides include blankets, horse boots and wraps, saddle pads, dog beds, supports and braces for people, and clothing. To learn more about Draper Therapies, visit at www.drapertherapies.com or call 781-828-0029.