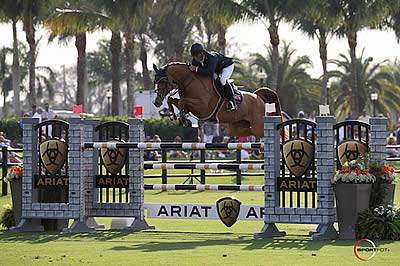 Course designer Steve Stephens (USA) wrapped up his duties for week four with the highlight grand prix event at PBIEC’s Equestrian Village, also home to the Adequan® Global Dressage Festival. Thirty-two entries started over Stephens’ first round course, and three were able to advance to the jump-off.

First to jump clear in round one, and first to jump off, Jennifer Gates guided Evergate Stable’s Pumped Up Kicks through the short course in a steady time of 51.28 seconds, incurring two time faults to earn the third place prize.

Sergio Alvarez Moya was next to go with G&C Farm’s Unicstar de l’Aumone, clearing the jump-off track in 40.30 seconds. Last to go, Minikus and Two Swans Farm’s Babalou 41 took the win, racing through the timers in 38.79 seconds.

Minikus was awarded the Village of Wellington Cup, and Babalou 41 earned the Champion Equine Insurance Jumper Style Award, presented by Laura Fetterman. The 12-year-old Oldenburg mare (Balou du Rouet x Silvio I) showed her experience of competing around the world by heading onto the impressive field for the first time and putting in two faultless efforts.

“This was hard because they had to walk out here for the first time and be right on their game,” Minikus stated. “You needed a little bit of an experienced horse, so it worked out for us. This was a 4*, and I think it was built as a proper 4*. It was difficult enough, and we had beautiful weather. That field is beautiful when you stand up there on the hill and look out there. This was always the best polo field in maybe the world, and the footing still seems quite nice.”

“She jumps very good on grass or sand,” Moya noted. “I was in this grand prix seven or eight years ago, and I love the ring. I like the mare very much and I thought it was a really good place for her. She jumped amazing, and I am happy with her.”

“I am over the moon,” Gates smiled. “I did him in some Under 25 classes last year out on the grass field, and he was amazing. I am ecstatic with how he jumped today. It took an experienced horse for that course, which I definitely had.

“I knew these two were going to be faster than me, so my plan was to try and have a clear round and put the pressure on a tiny bit in case they had a rail, which of course they did not,” Gates continued. “This past Thursday I was sixth in the WEF Challenge Cup qualifier, and that was my biggest accomplishment with this horse so far, so to come out here and be third was a huge deal. I am thrilled to be third in great company.”

Emma Kurtz of Wellington, FL and Stellar won the championship in the Bruno DelGrange Large Junior Hunter 16-17 division on Sunday morning. The pair won the stake and the handy class, placed third and fourth over fences, and fourth under saddle. Week four was Kurtz’s second time showing Stellar.

Stellar, a coming seven-year-old Hanoverian mare by Quintender, is owned and trained by Holly Orlando. It was Orlando’s six-year-old daughter, Logan, who led the mare in for the presentation photo alongside Kurtz.

“She’s very sweet,” Orlando explained. “We enjoy having her in the barn and taking her to the ring. She’s a first year horse so I’ll show her some, and Emma will show her some. My sister, Heather Hays, also helps train her. It’s a team effort for Stellar.”

“She’s a First Year horse, so she’s a little green,” Kurtz added. “She’s just figuring it out. They said this was only her second time jumping 3’6″. She’s amazing; she’s so brave, has a great jump, and is really fun to ride.”

Raleigh Hiler of Sudbury, MA rode her own Chapman ET to reserve honors in the division. The pair earned first, second, fourth, and fifth place ribbons over fences, and a second place ribbon under saddle. Chapman ET is a nine-year-old warmblood gelding.

The 2017 Winter Equestrian Festival continues with its fifth week of competition, sponsored by Fidelity Investments®, on February 8-12, 2017. For full results and more information, please visit www.PBIEC.com.