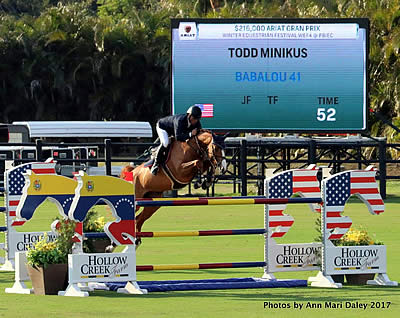 Wellington, FL (February 8, 2017) — Sunday, February 5, 2017 proved an excellent day at the office for Todd Minikus and Babalou 41, who together won the FEI $216,000 Ariat CSI 4* Grand Prix to close out week four of the Winter Equestrian Festival (WEF) in Wellington, Florida. Held on the beautiful grass derby field at the Palm Beach International Equestrian Center, the pair got down to business in their initial go, jumping a clear round amongst a field of 32 riders. In the final three-horse jump-off, they again made quick work of the competition by putting in another clear trip, securing the win.

Minikus and Babalou 41, a 12-year-old Oldenburg mare (Balou du Rouet x Silvio I) owned by Two Swans Farm, demonstrated their combined world-class talent and experience in the Ariat CSI 4* Grand Prix, clocking the win at 38.79 seconds. For their victory, Minikus was awarded the Village of Wellington Cup and Babalou 41 was presented with the Champion Equine Insurance Jumper Style Award.

“We didn’t have a warm up class, so it was hard for a lot of the horses to come out and be right on their game,” Minikus said of the venue. “You needed a little bit of an experienced horse. The jumps were the size of a proper 4*, and maybe there wasn’t a lot of difficulty as far as riding questions, but they were proper dimensions and horses had to jump. It was difficult enough, and we had beautiful weather,” he continued. “That field is beautiful when you stand up there on the hill and look out. This was always the best polo field in maybe the world, and the footing still seems quite nice.”

The Winter Equestrian Festival, which runs through April 2, 2017 and is held at the Palm Beach International Equestrian Center, is the largest and longest-running hunter/jumper show circuit in the world, with several million dollars in prize money at stake. As Minikus and his team of elite horses continue into the fifth week of competition of the season – holding numerous blue ribbons already – spectators and competitors alike will be on the lookout for what else Team Minikus has in store.