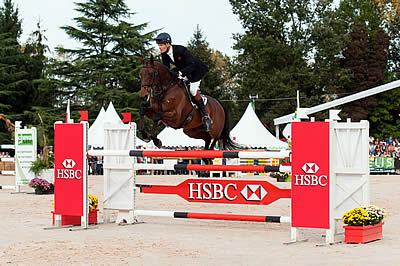 Lausanne (SUI), 27 October 2013 – William Fox-Pitt had three shots to clinch Les Etoiles de Pau (FRA), first event of the FEI Classics 2013/2014 season but, in a nail-biting finale, it took the Briton until his third and last ride, Seacookie TSF, to secure the top prize.

After an outstanding day’s Cross Country yesterday, Fox-Pitt was in the rarefied position of holding the top three places. However, his triple winning chance began to shrink alarmingly when Neuf des Coeurs, third at that stage and jumping out of order, hit five rails and plummeted to eventual 15th place.

To add to the tension, his next ride, Cool Mountain, lying second, dropped a rail, and therefore a place, to third.

Then Phillip Dutton (USA) and Mr Medicott, who had been lying fourth behind the Fox-Pitt trio, provided breathing space by hitting a rail. This gave Fox-Pitt a fence in hand to win on his Cross Country leader, Seacookie TSF, and only using up that margin, he finally clinched victory.

“It’s always nerve-racking coming into the showjumping when you’re in the lead, but having a fence in hand helps,” said a relieved and thrilled Fox-Pitt, who was clocking up the 12th CCI4* win of his outstanding career and his second victory at Pau within two years.

“Seacookie jumped clear when he won Blenheim CCI3* last year and when he was second at Kentucky in April. When he had a rail down this time, things did get a bit tense again, but he went on jumping well and it was my lucky day, I guess.”

The sensation of the day was France’s Maxime Livio, a CCI4* debutant, who used all his experience riding in international Jumping competitions to conjure a clear round from the 12-year-old Anglo Arab Cathar de Gamel. This moved them up to second place and a career best.

“My idea is to go into a competition feeling I can do it or there’s not much point being there, but to be second is fantastic,” said Livio. “My dressage wasn’t 100%; you can always make it better. Across country, my horse was quite tired at a few points and I had to calm down, so I hope to see those few seconds [over the optimum time] disappear in the future.”

The major beneficiaries in what proved an influential Jumping phase on Pau’s smart new arena surface were Cedric Lyard (FRA), who rose from 13th after Cross Country on Cadeau du Roi to seventh place, and Ireland’s Joseph Murphy on Electric Cruise who came up from 15th to eighth.

William Fox-Pitt, the hero of the weekend, despite suffering back pain throughout, pronounced himself “delighted” with his horses. “First and third is terrific,” he said. “They are all great horses and have done me very well over the years. They’ve been loyal and fantastic to ride and I’m very lucky to have ridden them.

“I’ve had this wretched back problem all weekend and really didn’t think I’d be able to ride, but my physio has done a brilliant job. This weekend has exceeded all my expectations.”

A three-time winner of the HSBC FEI Classics, Fox-Pitt has given himself an early lead in the rankings, and a well-earned winter holiday. No doubt competitors at the forthcoming Adelaide International 3-Day Event (AUS) next month will be relieved to hear that Pau wraps up the Fox-Pitt season!

He has also represented Britain 17 times in championships, winning Olympic silver (2004 and 2012) and bronze (2008), world team gold and individual silver on Cool Mountain (2010), plus team silver in 2006 and team bronze in 2002. He has six European team gold medals, team bronze, two individual silvers (1997 and 2005), and individual bronze this year on Chilli Morning. Fox-Pitt, 43, is married to Alice, a television racing commentator. They live in Sturminster Newton, Dorset, and have two young sons, Oliver and Thomas.

Seacookie TSF, a 14-year-old gelding by Helikon, owned by Catherine Witt, was produced to three-star level by German Olympic rider Ingrid Klimke. Fox-Pitt took over the ride in 2008.