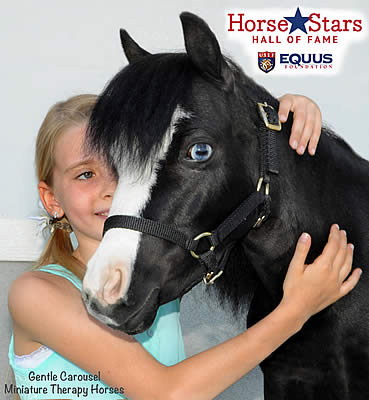 Gainesville, FL (February 22, 2014) — Gentle Carousel Miniature Therapy Horses has received a national honor with the induction of therapy horse Magic into the United States Equestrian Federation and EQUUS Foundation Horse Stars Hall of Fame for 2015. Magic was inducted at the EQUUS Foundation’s Fete Coeval Etoile on Friday, February 20 at the Palm Beach International Equestrian Center in Wellington, Florida. The Horse Stars Hall of Fame was established by the USEF and EQUUS Foundation to celebrate the extraordinary talent of horses and their magical and powerful bond with people.

Magic was honored as a humanitarian for having a life changing and inspirational impact on the public. From helping children and first responders at Sandy Hook Elementary School in Newtown, CT to child trafficking victims in Washington, D.C. and tornado survivors in Moore, OK, Magic brings her special love where it is needed most. She visits children’s hospitals across the country.

When Magic is not traveling she has a one of a kind partnership with the University of Florida Health Shands Rehab Hospital in Gainesville, Florida, an acute hospital for patients who have suffered strokes, traumatic brain and spinal cord injuries, amputations and burns. Magic works with occupational, speech and physical therapists as part of the treatment team. She has inspired patients in the therapy gym to reach out their arms for the first time and helped patients who are learning how to use adaptive equipment like walkers and wheelchairs. She even demonstrates rehab training stairs and ramps. Magic has worked with patients who have stood or walked for the very first time since their accidents or surgeries. Therapists have seen exceptional progress and motivation with patients teamed with the little horse. 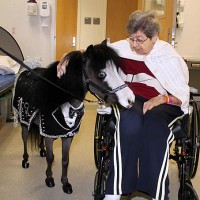 Working indoors would be a challenge for any horse but Magic makes it look easy. She walks up and down stairs, rides in elevators, walks on unusual floor surfaces, carefully moves around hospital equipment, works in small rooms and handles unexpected sounds like ambulances, alarms and hospital helicopters… and yes she is house trained. Every hospital is different and when Magic enters a new hospital she does not get a practice run. She must be comfortable walking through the door and crowds of people with her trainer no matter what new sights and sounds she encounters on the way.

The inductees were featured in a video and photo gallery accompanied by stories of their achievements.

Owners of the honored horses arrived from around the country. Therapy horse Magic attended the ceremony and met with fans and guests indoors during dinner and events. She also played with Harry de Leyer, owner and trainer of the famous Snowman (Eighty Dollar Champion: Snowman, the Horse Who Inspired a Nation) after the ceremony. Both Magic and Snowman were inducted into the Horse Stars Hall of Fame. “I will never forget you, Magic,” Mr. de Leyer told the little horse.

Magic’s other honors include:

One of History’s 10 Most Courageous Animals – Time Magazine

Most Heroic Pet in America – AARP

A Reader’s Digest/Americantowns Power of One Hero

A children’s park in Greece named after Magic and dedicated by former Prime Minister of Greece, Kostas Karamanlis

Featured in her own book, The Power of Magic – DT Publishing Group/New York, 2014