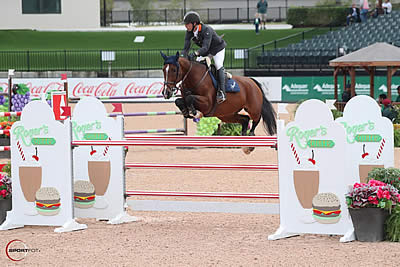 The Peter Grant (CAN) course welcomed 36 pairs on the first-round track, with nine pairs presenting for the jump-off challenge. Genn was second-to-last, and had a rough idea of what his strategy would be, but had to see what the 2006 Dutch Warmblood gelding (Ovidius x Joost) was up for, he detailed:

“For the jump-off, I only got to see the first couple go. I kind of had an idea of how fast I needed to go based on what I saw Sharn [Wordley] do when he was sitting in second. Boucanier is a naturally very fast horse – he skims a little bit across the ground – but he can get a little nervous when I go fast,” Genn said. “I knew within the first two jumps whether or not I was going to be able to go for it. He popped over one and two really nicely, and listened to me when I asked him to go faster without getting nervous, so then I knew I could let it rip a little bit. Then, I just kind of went after it at every jump. I got a little lucky around a couple, but they all stayed up!”

For Genn, the win was a bit of “badly-needed” redemption following a week of stiff competition, he revealed. “Honestly, overall, it wasn’t a great week for us [compared to last week]. I was having a really rough week, and was a little down! Last week, my horses were unbelievable here: it didn’t matter what happened, we still ended up jumping clean. This week, even though they went around nicely, we had four faults almost every time. So, this was a nice way to end it and go home. I’m just happy. I needed that badly!”

Genn is currently riding Boucanier for his owner-rider, Taylor Reid, and it was particularly special that Boucanier ended up on top at TIEC, he shared. “Good friends of ours, Taylor Reid and Alex Blackman, own him along with some other horses we ride. They were here today to watch, and it’s been a while since they were able to come visit, so that was really nice. Right now, Taylor is pregnant and due in four months, so I’m riding him and keeping him going, and then when she’s ready she’ll take him over and do him in the Junior Amateurs again.”

For now, Genn and crew are headed home. “We’ve been on the road for three weeks now, and I don’t like to show for more than three weeks in a row, so we’ll go home, give the horses a little break, and then head to Florida already,” concluded Genn.

“He’s an eight-year-old gelding that we got a little bit over a year ago,” Kay said of Ann Rice Ervin’s 2011 Warmblood gelding with unknown breeding. “I’ve been doing him some in the national derbies as well as the second-year greens 3’9” divisions. He’s a really sweet, easy-going guy. He’s super quiet; you kind of just chuck the reins and kick! He’s super fun. After this year, we’re looking to move up to the international derbies in the next year, which is why I did this derby today as practice.”

Alright was sitting on the edge of the podium after the first round, and Kay went into the handy round with a strategy to show off his mount’s pace and efficiency, he explained. “In the first round, I was a little slow to the first jump, and when I came back for the handy, I really wanted to just go for it a little bit to make up some ground, and just be efficient in my turns. I also wanted to step up the pace and show a real transition for the hand-gallop jump.”