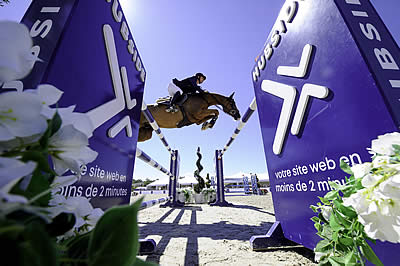 This event was eagerly awaited! The HUBSIDE JUMPING de Grimaud played host to the crème de la crème of international horses and riders for the first CSI 5* in the world since they started competing again. Judge for yourself: two thirds of the World Top 30 were present at the show organised on the initiative of Sadri Fegaier. The world hierarchy was respected on the track of the French course designer Cédric Longis, who was officiating for the first time at CSI 5*-level: Switzerland’s Steve Guerdat, the World number one, triumphed with Victorio des Frotards.  Three cheers for him! He finished ahead of the young French rider Edward Levy, and Sweden’s Peder Fredricson, the current World no. 6.

“The first round went really well. Victorio had already won the three 5-star Grands Prix in which he competed this year. I knew he could do it but despite this, there were a lot of unknowns in this Grand Prix, as I didn’t jump a lot with my horses during the lockdown. He jumped really well here during the first week of the HUBSIDE JUMPING and then he went home to rest a bit last week. He jumped really well in the first big class on Thursday, but in the 1m50 class on Friday I felt he was a bit tired.  So I wasn’t sure how we would do today. Apparently, the day off really did him good, because during the first round he jumped incredibly. I think that he has never jumped as well as that! I had a great feeling in the ring when we jumped the first round. The jump-off of this Grand Prix was really fast, like all the classes that take place here, and that’s why I chose to ride Victorio. He really gave it his all for me in the jump-off and I’m really proud of him! Next week, I will be back in the ring here but without Victorio, who is going home to have a rest.”