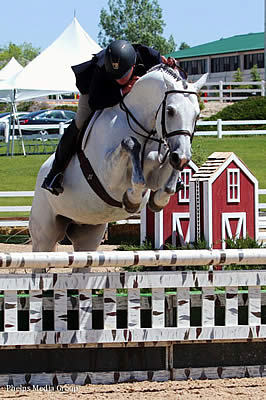 Will Roberts and Chicago.

Parker, CO – June 12, 2014 – The USHJA Pre-Green Incentive program is designed to stimulate Pre-Green competition and development. Never before was there an incentive based system to encourage the growth of these horses. The program was launched towards the end of 2012 and has been a huge success thus far.

The inaugural USHJA Pre-Green Incentive Championship was held in 2013 at the Kentucky Horse Park in Lexington, KY, with 110 horses attending and three rounds of competition deciding the champions. An even bigger turnout can be expected in 2014, as excitement for the program has become widespread.

As one of many of the diverse classes offered at Summer in the Rockies, the USHJA Pre-Green Incentive Stake has been a hit so far. Last week Mickey Sage and Adonis won the Stake, and this week the winners were MTM Retro and Kelly Lorek.

Before today, Lorek and MTM Retro had competed in two other Pre-Green Incentive classes. Today was their first win in the program, so there was much to be celebrated. The Holsteiner gelding is owned by MTM farm and also shown by Kaitlyn Arnold in the Junior Hunters.

In regards to the Pre-Green Incentive class, Lorek said, “I think mainly consistency is tested out there: their cadence, what their jump is like, and the flow in between it all.”

Many of the rounds put in today showed great evenness, but MTM Retro and Lorek were most successful at making each jump match.

“He comes out pretty much always the same,” said Lorek. “He’s pretty constant. I think the plan is to finish his year out at The Capital Challenge Horse Show and see where to go from there.”

Peroni, ridden by Courtney Calcagnini and owned by KNW Farms LLC, was champion of the Pre-Green 3’3″ Hunters with two wins and a third over fences and a victory in the hack. Lorek and MTM Retro were reserve in the division with three second place finishes and one win over fences with a fourth place in the hack.

The Pre-Green 3′ Hunter tricolor was awarded to Sochi with Will Roberts, and the reserve went to Adonis and Mickie Sage.

Pine Hollow Farm finished the day with even more ribbons to add to their collection. After starting the division strongly yesterday, Sarah Rice and McGraw, owned by Kimberley Quinn, lived up to expectations yet again. Today’s second and third over fences led them to the tricolor. Will Roberts’ double win over fences with Viceroy, owned by Bethany Bolen, brought them to the reserve position.

“I really think the smoothness factor is why these two horses come out on top often,” said Rice of the Pine Hollow duo. “They both have a very smooth look. They have a slow rhythm going around the ring which really shows off their large canter strides. And they tend to stay the same the whole time.”

McGraw and Viceroy are both Pine Hollow Farm favorites who are also shown by junior competitors. Roberts is amazed by Viceroy’s diversity while he switches between the hunter and equitation rings.

“He’s got such a great brain,” said Roberts. “He is as fancy as they come. He can do equitation, he can do the hunter derbies – he’s got a lot going for him. He’s a really, really sweet horse. He’s pretty talented. He’s 7 this year and was one of the youngest horses at all the equitation finals last year, and he does it all well.”

Today proved to be a success for Roberts, as he and Chicago were named champions and he and Storyline were named reserve champions of the Performance 3’3″ Hunters. Both horses earned a first and second over fences to finish off the division.

Chicago is Colorado born and raised. Roberts saw him showing in the Baby Green Hunters at Summer in the Rockies years ago and knew he had to have him. After he got a solid foundation with Roberts, Chicago was sold to current owner TeriAnn Miller at Pine Hollow Farm. Chicago seems to like being close to his roots here in Parker, as he performs well in the ring with Roberts.

Storyline, a recently imported gelding, is having great success with both Roberts and his wife, Lindsey Roberts, in the tack.