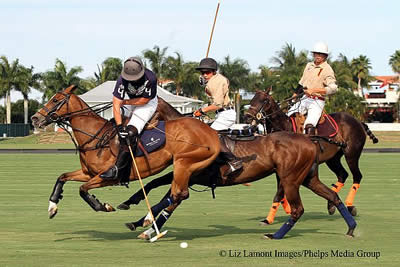 The game took off to a running start out of the first throw-in, with both teams jockeying for control of the ball. The first goal came on a penalty three by Panelo. He rode up to the penalty line with confidence and put The Plaid Horse on the board 1-0.

Speed was the name of the game as the teams battled it out, and there was no doubt in anyone’s mind that the crowd was watching the next generation of American high-goal polo. Jack McLean converted a penalty shot to give The Plaid Horse a two-point lead at the end of the first chukker.

Pony Express came out firing in the second chukker with a goal by Justin Daniels that began to close the gap. His second goal in the evenly matched game tied the score 2-all. Christian Weisz threaded the needle to pull The Plaid Horse ahead by one, but its lead was short-lived. Matt Cohen quickly picked up the ball in the next play and drove it in to score, tying the game again. Weisz made a stunning run on Bonita to score and end the half 4-3.

The third chukker played out as both teams left it all on the field, making huge runs and demonstrating their ball-handling abilities. Close to the end of the chukker Panelo tapped in a goal in tight traffic, making the score 5-3 to put The Plaid Horse ahead by two.

Daniels converted early in the fourth chukker to tighten the gap to 5-4, making overtime look like a real possibility. After a wide penalty shot by Panelo, Daniels converted again to tie the game 5-5. Weis made a heroic run out of the throw-in for a goal attempt, but the shot went wide, sending the game into sudden death overtime.

Panelo took matters into his own hands in overtime, taking the knock-in and rocketing forward in an incredible run up the field. Panelo wove through traffic as his teammates took out defenders, allowing him to continue his high-octane run to goal, ending the chukker only 26 seconds after it began.

“We just wanted to go have fun and hit the ball and play typical polo,” he said. “We had Joaquin stay back, and he took the knock-ins. We sent Jack and Christian up front. I just kind of hovered in the middle for the loose balls, and everything kind of worked our way.”

Christian Weisz thought it all came down to luck.

“Both teams played really well, in my opinion,” he said. “It could have gone both ways. We just got a lucky break at the end and ended up making it happen.”