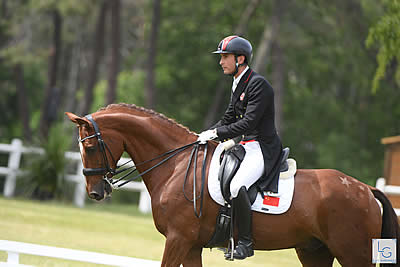 This weekend, at the international competition of eventing « Saumur Complet » during the CCI 3*L, countries from group G play their team qualifications for the next Olympic Games of Tokyo in 2020. After the first test (dressage), one of the three tests of eventing, China started well. Second after Japan, country that is automatically qualified as it is the « host-country », China get ahead of Thailand and Hong Kong. On the individual side, at the first place of the temporary ranking after dressage, we can find Alex Hua Tian… a Chinese athlete! Reaction of one of the coaches of the Chinese team, the French Pascale Boutet:

« This weekend’s challenge is huge. We have three countries, China, Thailand, and Hong Kong, and only two places for qualification at the next Olympic Games! In terms of sport experiences, those three countries are really young, and they all have recently decided to be active in eventing. The last 2018 World Equestrian Games had qualified Australia and New Zealand; Japan was automatically qualified; from then, the qualification process of the G group (Oceania and South-East Asia), only two places were still at stake. Those three countries have decided to take the opportunity, predicting that it might be easier to be qualified to the Olympic Games in eventing then in show jumping (explained by the fact that there are fewer countries competing in eventing than in show jumping). »

« I’ve worked with China for ten years, and everything got faster a few months ago. We had to put in place a viable project that plan to create a Chinese team training in Europe. Meanwhile, the stables had to stay in China as horses living in China cannot leave the country and the Chinese riders do not have a long-term visa. Thus, in Europe, China has three stables: in France, at my home, in Belgium, and another one in Holland with Martin Lips. The leader in this team is Alex Hua Tian, a Sino-British athlete, living in England. For the stables where I have the responsibilities, horses were bought in December; it is really recent. It is only the third competition, here in Saumur, for those combinations. In France, I train the horses, the riders train in China, and they come back in Europe a few days before each competition. Today’s results, in dressage, are encouraging; we are particularly proud! »

« If China qualifies its team for Tokyo’s Olympic Games, then we will have to qualify individually the athletes that will compose the Chinese Olympic team. Those individual qualifications are done at the CCI 4*L level; our riders do not have experience at this top level; the challenge will be higher than qualifying the team this weekend. But in the Chinese culture, we go for it; we trust coaches and horses! Yesterday (Wednesday 22th of May), we have done the course inspection; they were impressed as they do not have the experience at this level, but they will go for it! As they will do at the 4*L level, if they succeed to qualify a team. We will have then to qualify three athletes; it will be another huge challenge, as there is a big level difference between 3* and 4*. The stable based in Holland from a longer time than the one in France, has few experiences at the 4* level, but the athletes of the horses based in the French one haven’t any experiences. »

So let’s see what will happen Saturday morning, from 10 am, for the CCI 3*L cross-country test. The gap between the results after the dressage test is small. Thus, the competition between the three countries is going to be thrilling. China has only 19 points (89,2) ahead of Thailand (108,2) and 25 points from Hong Kong (114,9), meaning nothing when we know that a refusal in cross country is already 20 points!