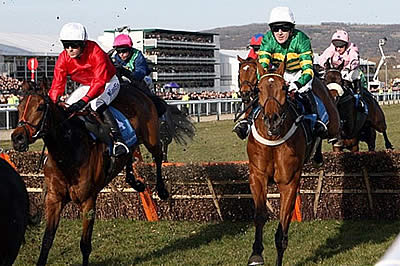 As each day passes, the updates on the runners and riders for the forthcoming Cheltenham Festival come in thicker and faster. Many of the most fancied horses hold entries for two or even three races, with the owners and trainers keeping their options open as to which horses they will ultimately run where.

Often, it is a case of choosing between a better chance of victory in a support race and an outside shot of glory in one of the big money showcase events, and it is intriguing to watch the agonizing decision making as the entries slowly but surely fall into place.

This final jostling also has a major impact on the betting odds – after all, if a strong horse holds an entry for a minor race, it will inevitably be a favorite, and if the trainer withdraws it, the field suddenly becomes wide open.

An expert eye to make sense of it all

The Festival has the eyes of the racing world upon it from all corners of the globe, but to get a feel for the latest developments and gossip, it is important to have a source of information that’s close to the action. Racing Tips has a team of experts monitoring the news from the top stables, and keeping track of the bookmakers to provide a constant stream of festival predictions in the run up to the great event. Here are some of the latest stories that have attracted their attention.

The news that Harry Fry has had to withdraw If The Cap Fits from the Supreme Novices Hurdle removes the biggest obstacle for Getabird in the opening race of the festival. Anything can happen in this race, and outside shots have a habit of doing well, so it is by no means a foregone conclusion. But the Mullins trained gelding has always been a warm favorite, and the withdrawal of the horse seen by bookies as his closest rival has pushed the temperature up a couple of degrees.

More questions than answers in the Stayers

A couple of weeks ago, we ran through the favorites for the key races, and Sam Spinner was at the top of the tree for the Stayers Hurdle on Thursday. That has been turned on its head by a number of factors. Supasundae’s fabulous win in Dublin has contributed to make the horse the new favorite among bookmakers, while Alan King’s decision that Yanworth will be a runner has also sent the oddsmakers into a spin. The advice from the tipsters? Ignore the battle for the favorites and place an each way bet on Nicky Henderson’s L’Ami Serge – with all the jostling higher up the betting card, this horse is still being offered at 12/1 and that’s just too good to refuse, particularly given that Henderson seems quietly confident in this one.

Cue Card in the RyanAir

One of the best loved horses on the circuit, everyone would love to see the 12-year-old Cue Card romp to glory in the Gold Cup, and no one more so than trainer Colin Tizzard, who didn’t have a single winner at last year’s festival. He is sorely tempted, and told reporters: “There is no reason why we shouldn’t go for the biggest one. Is that harder to win than the Ryanair?” The answer is that yes, it is, and this is one occasion when the head needs to rule the heart. The rumors are that Cue Card is likely to be withdrawn from the Gold Cup and race in the Ryanair Chase on Thursday, particularly given the news that Waiting Patiently, the horse that narrowly beat him to glory in the Ascot Chase last week, is now a doubtful starter.