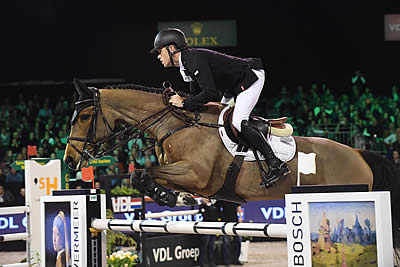 From 14-17 March 2019, the town of ‘s-Hertogenbosch is set to welcome 65,000 spectators for the 52nd edition of The Dutch Masters, the Netherlands’ leading equestrian show. Visitors can expect an extensive programme of equestrian competitions featuring elite national and international show jumping and dressage riders. The event will reach its climax on the Sunday afternoon with the Rolex Grand Prix, in which the best show jumpers in the world will compete to become the Rolex Grand Slam of Show Jumping live contender.

Many of the world’s top horse and rider combinations will compete at the 14,500 capacity Brabanthallen ‘s-Hertogenbosch, the impressive indoor arena in the Dutch town. This year there are a number of contenders who are among the favourites to claim a victory in the first Major of the calendar year.

Hotly tipped to take the prestigious title will be Marcus Ehning, after he won the most recent Rolex Grand Prix at CHI Geneva in December 2018. The German enjoyed a thoroughly successful year, riding Pret A Tout to victory not only in Geneva, but also at CHIO Aachen. Ehning will be riding a different horse in the Netherlands later this month, which will make for fascinating viewing to see how he performs as a different combination.

Current world number one-ranked show jumper and Rolex Testimonee, Steve Guerdat, will be looking to claim the first Major of the year and brings with him a strong contingent of horses. After finishing fifth and then second at CHIO Aachen and CHI Geneva respectively in 2018, Guerdat will attempt to go one better and secure his fourth Major and become the new live contender.

Another rider looking to continue his fine form is Niels Bruynseels. The Belgian won The Dutch Masters last year, meaning he will be looking to replicate his strong showing in the 2019 edition of the Major. Currently sitting at number 15 in the global rankings, the 36-year-old will be aiming to break into the top 10 with another win in the Netherlands this month.

Performing in front of their home crowd are riders Harrie Smolders and Jeroen Dubbeldam. Smolders rode well in 2018 and at one point claimed the top spot in the world show jumping rankings. Although he has now dropped to third, he will be targeting The Dutch Masters as an opportunity to propel himself back to the summit. Dubbeldam is a rider who has already accomplished so much within show jumping and is recognised as a true legend within the sport. Although it’s uncertain who will win the Major, what can be assured is that they will be supported by a strong patriotic crowd at the Brabanthallen ‘s-Hertogenbosch, which will benefit them in their pursuit to claim this prestigious Major.

Someone who can never be overlooked when considering potential Rolex Grand Prix winners is legendary equestrian Scott Brash. What sets the Scotsman apart from other riders is that he is the only ever winner of the distinguished Rolex Grand Slam title, having won three Majors consecutively in 2015. This unprecedented feat has still not been replicated, and as a result Brash is a name that is synonymous with success in the Majors.

Young, up-and-coming rider Bertram Allen is a name to pay attention to during this year’s event. The 23-year-old is the youngest member of the Rolex Testimonee family and currently sits at the top of the FEI Jumping U25 Rankings and will be aspiring to achieve a similar position within the main rankings. The Irishman will unquestionably be hungry to claim his first Major.