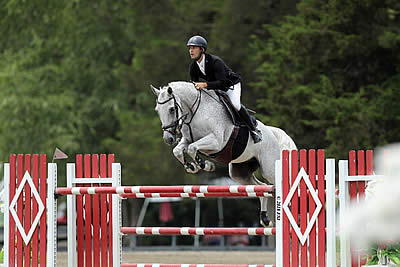 Agustin Rosales Soars to First and Second in the Open Prix; Dominique Damico Jumps to First in the Devoucoux Hunter Prix

Exhibitors jumped into another week of Show Jumping Competition at HITS Commonwealth Park to wrap up the July series of the circuit in Culpeper, Virginia. With trees and flowers blooming and beautiful sunny weather, the two-week HITS Culpeper July Series were just what exhibitors were hoping for.

“It’s been a nice two weeks for me in Culpeper,” said Gavin Moylan, owner, trainer, and rider at Meadowville Farm, based in Middleburg, Virginia and Wellington, Florida. “I won the Devoucoux Hunter Prix last week and the Johnson Horse Transportation Prix this week, so I practiced all the disciplines!” he continued. “I have a new group of horses and this was a great place to bring them to get them started jumping some bigger classes. The footing is great – even better this week than last. Rian Beals (Technical Coordinator) does a nice job running things outside and is easy to work with.”

Pam Baker, owner and trainer at her Hillcrest Farm in Bealeton, Virginia, had a successful two weeks with her clients, and expressed her appreciation of the shows. “I’ve always loved Culpeper – of course I’ve been showing here decades! Now that the footing has been redone I think Culpeper is one of the best facilities in the country.” Pam is also a fan of the Quiche breakfast special served on Saturday mornings at the restaurant. “I wish they had quiche on Sunday too! It’s SO good!”

Melissa Rundershausen and CHARMEUR ASK soared into the Cavalier Classic with a win in the $5,000 Open Welcome Jumper on Wednesday, securing the first place ribbon.

On Friday, Gavin Moylan would capture the blue ribbon in the $10,000 Johnson Horse Transportation Prix aboard DON FERNANTES Z in a time of 38.347. Taking home the second place ribbon was Lucy Matz and CARDELLA in a time of 38.360, followed by Agustin Rosales and CAPELIUS S in third with a time of 39.291. Dominique Damico would take home the fourth and fifth place ribbons aboard WOODSTOCK O and DORELLA HBC, respectively. Damico finished with times of 40.036 and 40.260.

Taking home top honors in the $20,000 Purina Animal Nutrition Open Prix at the Cavalier Classic was Rosales and CAPELIUS S in a time of 39.236. Rosales also captured the second place ribbon aboard AVALON in a time of 41.862. Alex Matz rode to a third place finish aboard CASHEW CR in a four-fault time of 41.762. Ashley Foster would round out the top five, taking home both the fourth and fifth place ribbons aboard DALIANTE M and LUMINOUS, respectively. Foster jumped to her placings with a four-fault time of 49.645 for fourth and an eight-fault time of 53.620 for fifth.

To go along with her successes in the jumper ring, Damico jumped to a win in the $1,500 Devoucoux Hunter Prix aboard NEMESIS 11 with a score of 84 in Round One and 82 in Round Two for a combined score of 166 to secure top honors. Taking home the red ribbon in the Hunter Prix was Sara Taylor aboard EXCELLENT with scores of 86 and 78 in her two rounds, adding up to a total score of 164. Rounding out the top three in the Prix was Katie McAfee and CAPPUCCINO. McAfee scored an 87 in the first round, the highest of those competing, and a 75 in the second round putting her in third with a two round total of 162.

Taking home the top honors in the $1,000 Platinum Performance Hunter Prix was Catherine Black and HEADLINES with scores of 77 and 84 for a combined score of 161. Second place was Jakob Kronenwetter and EYEWITNESS scoring a 75 in Round One and 72 in Round Two for an overall score of 147. Lauren Miller would round out the top three in the Junior/Amateur Prix aboard FERNHILL STARBOY with a two round total of 134. Miller scored a 65 in the first round and a 69 in the second round.