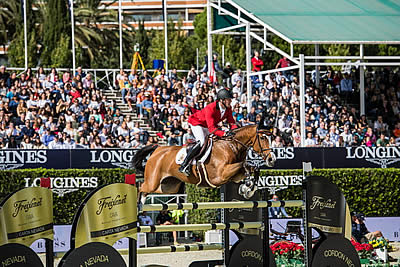 There’s a super-sizzle of excitement ahead of this week’s Longines FEI Jumping Nations Cup™ 2019 Final which kicks off on Thursday at the beautiful Real Club de Polo in Barcelona, Spain. This will be the seventh consecutive year for the event to take place at the iconic venue that played host to the Olympic equestrian events of the 1992 Olympic Games and, once again, it will be ace Spanish course designer Santiago Varela who will be testing the best over four days of fabulous sport.

In this 110th season of the FEI Nations Cup™, its appeal is as powerful as ever. The horses and riders proudly fly their national flags and the public love to cheer on their own teams as they chase down the prestigious title. Last year’s champions from Belgium are major contenders once again, having clinched European team gold just five weeks ago in Rotterdam (NED). They look a formidable force with just one absentee from the side that stood on the top step of that podium as they send out Pieter Devos, Jerome Guery, Olivier Philippaerts, Gregory Wathelet, and Niels Bruynseels.

After 12 qualifiers in 12 countries on three continents, a total of 18 nations have booked their tickets to the Final which offers almost €2m in prizemoney. Belgium, Brazil, Columbia, Egypt, France, Germany, Great Britain, Ireland, Italy, Japan, Mexico, Netherlands, Norway, Portugal, Sweden, Switzerland, and USA have all made the cut, and Spain lines out as host nation.

And for seven of those countries there is a lot of extra pressure, as they are all vying for the single qualifying spot left for the Tokyo 2020 Olympic Games. This week in Barcelona presents them with one final opportunity, but it’s right down to the wire and the tension is tangible.

Colombia, Egypt, Ireland, Italy, Norway, Portugal, and Spain will need to get their act together from the moment the action gets underway in Thursday’s Longines FEI Jumping Nations Cup™ Final first round which kicks off at 14.00 local time. There will be nowhere to run and nowhere to hide, because only the top eight teams after Friday’s second round will qualify for next Sunday’s title-decider, with the remainder going into Saturday’s Challenge Cup. The fight between those seven countries for the Tokyo slot is likely to be just as fierce as the battle for supremacy in the series finale itself.

While the Belgians look super-strong contenders, there’s no looking past Andy Kistler’s Swiss selection. He’s spoiled for choice because he has the World No. 1 and reigning Longines FEI Jumping World Cup™ champion, Steve Guerdat, and the World No. 2 and recently crowned European champion Martin Fuchs in his side along with Arthur Gustavo da Silva, Beat Mandli, and Niklaus Rutschi. Also hot-to-trot are the Swedes who, under Chef d’Equipe Henrik Ankarcrona, have shown fantastic form of late. He sends out the incredible Peder Fredricson, currently World No. 4, whose heroics this summer have been nothing short of legendary and who will be joined by Stephanie Holmen, Fredrik Jonsson, Evelina Tovek, and Henrik von Eckermann.

And of course, every German side has to be treated with the utmost respect. With Christian Ahlmann, Daniel Deusser, Marcus Ehning, Laura Klaphake, and Maurice Tebbel on call-up, it seems very likely indeed that they will be gunning for pole position after finishing second to the Belgians in Rotterdam just a few short weeks ago. But the Barcelona Final has a history of springing surprises, and last year Germany didn’t make the cut into the last day, having to settle for victory in the Challenge Cup instead, ahead of the USA. Neither of these two nations will want to find themselves in the same position again this time around, and the Americans look like they also mean business with superstars Laura Kraut and McLain Ward backed up by Eve Jobs, Chloe Reid, and Richard Spooner.

On Wednesday 2 October, there will be a draw for the order-of-go and then it’s down to business the following day when all-comers will take on the defending champions from Belgium. If their latest exploits are anything to go by, the rest will all need to be at the very top of their game because it’s not without reason that Belgian Chef d’Equipe, Peter Weinberg, called his 2018 champions his “never-give-up team.”