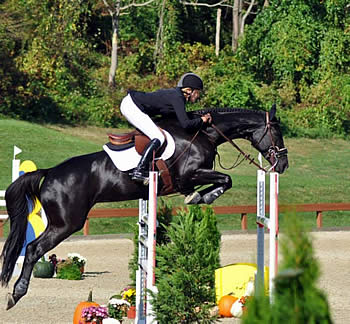 Anne Kursinski and Diva captured the $25,000 Ridge at Riverview Grand Prix victory. They were awarded the The Rebecca L’Heureux Trophy for their win. (Photo By: Photo ©2013 CEM&P, LLC)

Asbury, NJ – October 21, 2013 – The crowning jewel of the 2013 Hunter/Jumper Horse Show series, The Fifth Annual Asbury Classic, came to a conclusion October 13, 2013 at the Ridge at Riverview. The show saw top competitors gather to contend for the coveted prizes in their respective divisions, and was highly successful with extraordinary sponsorships, fabulous exhibitor amenities and a fantastic turnout for the 2013 Asbury Classic II.

The top-tier facility is run by Nona Garson and George D’Ambrosio, both of whom have been involved with show jumping at its highest levels for most of their lives. “George and I have been working hard to build this facility for over four years now. It took us years to find a property that had the character we were looking for combined with a good location and enough room to build a world class show center,” Garson explained. “We have put a great amount of thought into the design after years spent competing both nationally and abroad; we feel we have replicated the atmosphere experienced at Five Star International Show Jumping events around the world.”

Although the dark clouds rolled in at the beginning of the week, The Asbury Classic was blessed with perfect weather for the weekend competitions. The competition was held in two state of the art “all weather” sand rings and on the beautiful, well-manicured grass derby field. The show was well attended with riders from at least nine different countries competing for top awards in all divisions.

It was Anne Kursinski’s first time showing at the Asbury Classic, but she has guaranteed a return to the show next fall. “It was my first time, and it is a very nice show. I heard good things about it, and I am very happy that we went. It is a lovely atmosphere, friendly, and warm. I brought several ponies with, and they won almost every pony division. It was nice to be able to have the ability to show the ponies in such a traditional environment, and also compete aboard my mare Diva – she won the $25,000 Ridge at Riverview Grand Prix on Sunday. I will definitely go back, because it is a very nice show.”

Garson and D’Ambrosio were grateful for the support they received from top sponsors including top sponsors Hermitage Farm and B. W. Furlong & Associates. Due to their generosity and support of the Asbury Classic, the show was able to offer increased prize money for all contenders in the highlight classes. In addition to the prize money, ribbons, trophies, and coolers that were awarded throughout the event, there were many special awards.

During the show, the Asbury Classic’s Exhibitor’s Hospitality Tent was a big hit, serving wine and cheese in the afternoon as well as daily specials including a very popular “create your own” baked potato bar on Saturday, and a delicious hot meal on Sunday for all to enjoy while watching the Grand Prix. Spectators and exhibitors alike were able to enjoy the day while enjoying a crisp glass of chardonnay, or indulging with a dessert.

From lead line participants to the Futures Grand Prix, all had a good time. In fact, Kursinski stated, “It is a horseshow by horsemen, and I think you can really feel that. It isn’t any old cookie cutter show. Under the tent they had great food, and the hospitality was terrific. Everyone was so happy and friendly. All of the extra awards that they do, were greatly appreciated, and really made it special. They really try hard to make it a special show – it has a nice old-fashioned feeling in the sense of the small things. You feel like you are at a horse show. It was a pleasure to be a part of it.”

The $2,000 Asbury Hunter Derby saw thrilling action as top competitors vied for the coveted champion title. Patty Stovel and Cavendish rode to the top of the leader board with flowing rounds, using the open grass field to the best of their ability, catching the judges’ eyes with their traditional hunter style. Stovel was able to take a 1-2 finish with her second mount Lucan finishing with the red ribbon, while BJ Ehrhardt and Woodrow, last year’s Asbury Hunter Derby winners, finished with the third place honors.

In the M&S Children’s/Adult 3′ Hunter Horse Derby, Julianne Marklin rode her own Simply Amazing to the top, taking it all with a beautiful two-round competition. Brooke Buckman and Houston Blue stood center ring for the blue ribbon presentation after laying down two flowing rounds in the $500 Children’s Hunter Pony Derby, taking the win.

The Itty Bitty Mini Prix proved once again to be a huge hit with a large field of entrants. Jennifer Liston and Savvy blew spectators away with their speedy round. The pair took the top honors, while Eugenia Hernandez and Whoopy came in a close second. Madeline Mitchell and Catch Me If You Can finished third, rounding out the top three for the second-annual Mini Prix series.

It was Penny Brennan and Sun Tzu who rode to the top of the leader board during the Asbury Classic’s $7,500 Open Jumper Welcome Stake. The chestnut gelding proved speedy and accurate as he captured the win just ahead of Devin Ryan and Boucanier. Brennan also took the third place with Japan.

Germaine Edelmann and Coco proved victorious in the $2,500 Futures Grand Prix, riding to the quickest time over the 1.25m course. Kevin Babington and Jokalux were right on their heels as they finished with the second place award, and Amanda Flint aboard Santa Ana Lux Z took home the third.

The $25,000.00 Hermitage Farm Grand Prix had a field of 26 entries. The tension seemed tangible as riders entered the ring to go against the clock at the Asbury Classic. Although many tried, it was Anne Kursinski and Diva who posted the fastest double-clear effort, leaving all rails in place while using their quick pace to their advantage. Kevin McCarthy took second place with Vivawell, and Amber Harte captured the third place on Amir Van De Helle.

“It was a great test for my mare,” Kursinski stated. “The competition was great, and there were fast horses and a good course. In the jump-off, since there were 12 in it, I knew I had to go fast. Diva is a Hanoverian, but she is like a thoroughbred. She left a stride out of both of the lines, and she did it easily. I went fast and she still jumped high and clean, we took the win with two seconds in the end.”

Kursinski concluded, “It had a nice sized crowd watching the Grand Prix, and I am looking forward to competing in their Friday Grand Prix Series in Wellington, Florida. I have already told George and Nona that I am excited to bring Diva to their series. She is young, and needs the experience. It is so great that it is horsemen holding the horseshow; it is done by horsemen for horseman, and you really feel that when you are there.”