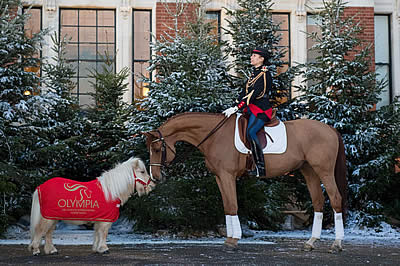 Olympia, The London International Horse Show, taking place from 17-23 December 2018, brings almost 400 horses to central London for elite international competitions, equestrian displays, and performances. As the UK’s largest indoor Show, and the only Show to host all three FEI World Cup™ Qualifiers in Dressage, Show Jumping, and Driving, over 90,000 spectators are due to attend the annual event, in addition to the world’s best riders.

Having travelled to the capital city from as far as France, an array of equine and canine animals (listed below) arrived in ‘two-by-two’ formation to the Olympia London venue, early Sunday morning, entering through the Grand Hall entrance.

Two animals from each of the following displays took part:

• Teddy the Miniature Shetland: Instagram sensation Teddy has over 100,000 followers was  joined by Olympia’s mascot, a miniature Shetland foal named Bonnie
• La Garde Républicaine: The world-famous French cavalry regiment, one of the most talked about branches of the French Gendarmerie, bringing their spectacular ensemble of twelve horses to music.
• The Osborne Refrigerators Shetland Pony Grand National jockeys and ponies: The best upcoming jockeys and their ponies, including Lucas Murphy, son of National Hunt jockey, Timmy Murphy, and Daisy Harrap.
• Festive donkeys – Dora and Nora: Representing the Official Charity of Olympia 2018, The Brooke Action for Working Horses and Donkeys.
• Kennel Club Dog Agility dogs: The UK’s most talented dogs attend the Show to compete in The Kennel Club Dog Agility, the pinnacle of the Dog Agility calendar.