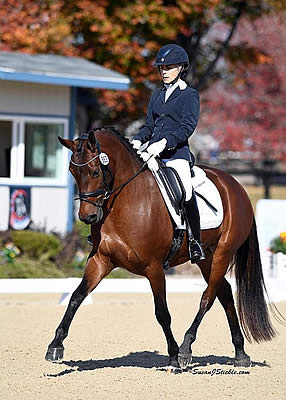 Lexington, KY – (Dec. 6, 2016) – The state of Texas was well-represented when Region 9 raked in the ribbons at the 2016 US Dressage Finals presented by Adequan®. Thirty-three of the region’s 35 riders attending the Finals hailed from Texas with an almost even distribution of Adult Amateurs (16) and Open riders (19).

Region 9 placed third in the US Dressage Finals Regions Cup in which the top three scoring riders of designated divisions competed on regional teams to win bragging rights for their respective USDF Region. Participants Bonnie Canter from the Houston area rode Fifinella GCF to win the championship in the Second Level Adult Amateur (AA) Finals with a 72.317 percent, Terri Sue Wensinger from the Dallas area rode Valentino in the AA Prix St. Georges Finals to earn a 65.263 percent, and Arkansas’ Amanda Bailey and Les Paul scored a 69.621 percent in the AA Training Level Finals for a total regional score of 69.067 percent.

“We were well-represented in Region 9,” said Canter, adding that it was exciting to be among some of the elite in the sport at the event held at the Kentucky Horse Park in Lexington Nov. 10-13. “You felt like you were in the big-leagues. It was fun to see a lot of the names you read about or have seen videos of actually riding. It was nice to be in the thick of things. That was a treat for us.”

Another AA rider, Ashlee Watts of College Station, Texas, also earned accolades at the Finals. She and her 8-year-old Danish Warmblood gelding Hampton (Hotline-Madiganl) scored a 72.059 percent for the championship in the AA First Level Finals, although it was a bit of a rocky start to this year’s event. In 2015 when she qualified for the Finals, she arrived early and settled in. This year, her demanding job as a veterinarian specializing in equine orthopedics at Texas A&M University changed the dynamics. Her husband trailered Hamilton to Lexington and Watts flew in with time for one warm-up before the show. She hadn’t ridden in a week.

“It wasn’t quite the preparation that was ideal for either of us,” she said. On Friday, they competed in the AA Second Level Finals class to place fifth with a 68.699 percent. “He was a little too hot and spooky. As a result, I overrode the tempo and it was not a very good test.”

On Saturday, she warmed up a little more carefully and asked for a little bit less. “Whenever I enter at A, he turns it up at least 10 percent, sometimes 20 percent. When he doesn’t have time to get used to the venue, I think I really need to back off.”

Her Saturday ride was an early morning one and the temperature was in the high 20s to the low 30s – quite a change from the 90-degree temperatures in the Houston area. “He was awesome on Saturday and his normal, cocky, amazing self.”

She was impressed with the event and with the riders from her area. “The show was very exciting and very friendly with lots of nice people and a lot of really nice horses,” she said. “I think in my Second Level test there were three people from Region 9 in the Top Ten. Region 9 has become very competitive with quality horses, riders and trainers.”

Another hard-working Houston area rider, John Mason of Conroe, Texas, also dealt with a bit of equine excitement at the show. The head trainer at Tex-Over Farms rode four horses in 14 classes at the show.

“I had one horse [Adante’s Image, a 9-year-old Holsteiner/Cleveland Bay gelding by Linaro out of By the Grace of That owned by Nancy Kretschmer] that was slated to do well and the test was going really well,” he said. “He got a little exuberant and high on life and we had a small melt-down in our test. He won his Second Level warm-up test the first day with a 71.098 percent and got second in his warm-up test the second day. The first of his Finals test was absolutely spectacular and then in the canter work he just got a little bit rambunctious.”

Not only did Mason ride in 14 classes but he also brought one of his students to the National Finals.

“As always, I loved it,” he said. “Finals is our opportunity to play with the big boys and to see what the competition is like for some of the bigger shows. I enjoy it. It’s great having that level of competition and being able to be competitive against that caliber of horses. I think the difference between my eighth-place finish in the Freestyle Open on my I-1 mare [Christine Renne’s Faye, an 11-year-old Hanoverian mare by Forsyth out of Elfe] and first place was around two percentage points [Mason scored a 69.00 percent and the winner, Morgan Barrow, scored 71.708 percent on Janice Davis’ 8-year-old Oldenburg gelding, San Corazon]. To be that close to winning in a test I was really proud of – for me, that’s what it’s all about. It’s making sure I’m on the right track to be competitive with the best horses in the country.”

Another pro, Anna Whit Watkins, rode in her second National Finals. She said the Texas people took it in stride when things got tough, including when the electricity failed in the main arena due to a blown transformer.

“I was watching and Erica-West Danque was riding and she was doing her line of three tempis and the lights just went ‘poof’ and it was totally dark,” Watkins said. “It took 30 seconds or a little longer for the emergency lights to come on and she walked around for a little bit and the judge at C said, ‘Maybe you should start that line again.’ And she did.”

Watkins claimed the Reserve Championship in the Open Grand Prix on Friday night on her own Oublette, a 20-year-old KWPN gelding by Amulet out of MV Jinnardi. “I was Reserve Champion the first time I came to Finals in 2013.”

They placed fourth in the Open Grand Prix Freestyle Finals class with a 69.458 percent. She said her freestyle, created by Tigger Montague of Virginia, has been successful for she and Oublette in shows in Florida as well as in Houston. “My horse really likes the music,” Watkins said. “It’s been a blast to ride. The music really fits him and its fun. It helps that he likes his job. He’s a fine fellow.”

Watkins agrees that the US Dressage Finals is a unique opportunity. She appreciated the excitement and atmosphere of the show but was quick to say that it felt like old home week since she and her students were stabled next to fellow Region 9 riders Mason and Danque.

“When people go and get out of the region, they begin to appreciate the diversity and the amazing athletic ability that we have across the country,” she said. “When you go to the National Finals, you begin to go, ‘Oh these people are pretty good. There’s a lot of competition around here.’ It gives you perspective and it’s a fascinating place to go see people ride.”

To see the show results, go to results.horseshowoffice.com. To learn more about the Houston Dressage Society, go to houstondressagesociety.org, and like them on Facebook at www.facebook.com/HoustonDressageSociety.