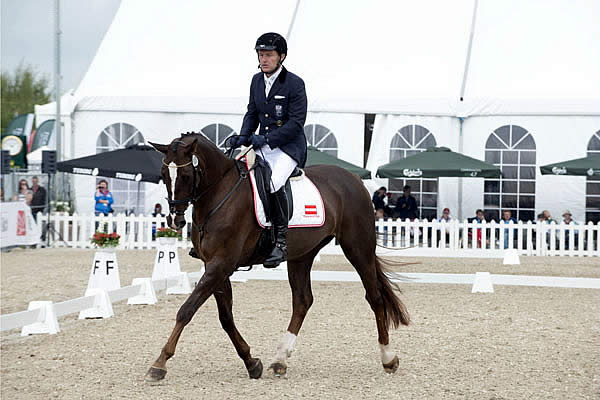 Herning (DEN), 21 August 2013 – Grade IV and Grade Ib riders took to the arena for the first day of the team competition at the JYSK FEI European Para-Dressage Championships in Herning (DEN), today.

Host nation Denmark also got off to a good start, with its riders taking third place in both grades. Line Kongensgaard slotted in behind the leading pair in Grade IV, steering Loponio to 70.405%, and Stinna Tange Kaastrup and her new ride Steffi Graf finished on 71.240% in Grade Ib.

A new page in the history books of equestrian sport was turned today, with Para-Dressage athletes competing for the first time alongside their Jumping and Dressage counterparts at an FEI European Championship. The honour of being the first rider to compete in an integrated competition on the European stage fell to Ireland’s Rosemary Jean Gaffney, riding Ustero. “My partnership with this horse is only three months old and it is the horse’s second international start and first big test,” she said. “It’s a great honour to be the first rider at the first integrated competition.”

The three best combined scores from the team and individual test (in the five classifications) will decide the team medallists on Saturday, 24 August.

Speaking after her win, Sophie Wells said: “We came here to have our best possible competition and have had a solid start. It took us three days to travel here, so now my horse can rest for the rest of today and tomorrow, and then we can go out fighting (in the individual competition) on Friday. When we got here I just wanted to get on with it and it’s good to get the first day over with.

“We’ve got a really good support team around us and we definitely wouldn’t be here without the support of UK Sport and National Lottery funding.”

For Belgium’s Michele George, the day’s test was a good sign of the developing relationship with her mare Saganne. At just seven years old, Saganne (who Michele describes as being ‘born in my arms’) is relatively young and inexperienced, and so Michele was more than happy with her performance. “She is just beginning, so it is very exciting to see what this brings,” she said. “She’s a new horse and everybody is looking, but I don’t want to feel pressure. She needs to learn and, for me, she is a horse for the future. I don’t want to put pressure on her, but if the medals come I’ll be happy.”

Pepo Puch is the current Grade Ib world number one and Herning is his first major international event since winning gold and silver at London 2012. He said of his performance: “It’s amazing how positive my mare was. It’s not an easy arena as the people are quite close and in the free walk you have no reins and the horse has to be really settled and positive. I would say thank you to my mare: she did a good job. Our horses have to work to compensate for our disability and it is not easy for her to compensate for my bad hand. For me this is the most difficult test. With the music (in the freestyle competition) you get much more rhythm and that is easier, so I am really happy to get this result.”

For Grade Ib runner-up Ricky Balshaw, Herning marks a return to top flight competition since he suffered a severe injury after winning silver in Hong Kong at the Beijing Paralympic Games in 2008. “I’m really pleased with the result,” he said, “as it’s the biggest arena my horse has ever seen. It is only our third international test and, for him, it’s a big learning experience. There were some things in the test where I feel I could pick up a few marks but we can fix those.”

Today’s last words go, however, to the two third placed Danish riders. Stinna Tange Kaastrup, it could be argued, is one of the faces of this competition having won individual gold and silver medals at the 2011 European Championships. Her relationship with her horse, Steffi Graf, is less than six months old and this was their first major international competition. “I had a fantastic ride,” she said. “She has developed incredibly fast and really did her best today. Steffi is a pleaser who does her best to make me happy.

“Riding on home ground is great. I can tell that people are with us. It doesn’t feel like pressure, just support. My goal is to have good rides and if it doesn’t pay off in medals I will not be disappointed. I can’t expect medals when I’ve only had my horse for so little time but, of course, I will be happy if they come my way.”

Stinna’s team mate, Line Kongensgaard, made her major international début in Herning and was the first Danish rider to take to the arena in this championship. She said: “I was very nervous, but it went well. I could have had more power but I rode on the safe side. There was a lot of pressure being the first rider of the team, but it is over now so I can relax and focus on the individual competition.”

FEI TV: key performances and interviews with medal winners will be available as video-on-demand from the JYSK FEI European Para-Dressage Championships on www.feitv.org.