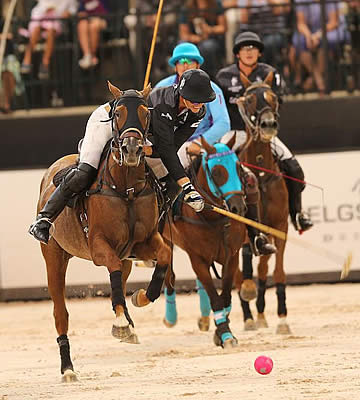 Mill Spring, NC – August 3, 2019 – Team Greenville held on for a nail-biting 9-8 win over Team Charlotte to repeat their 2018 win at Tryon International Equestrian Center (TIEC) at Tryon Resort, playing in front of a packed and energetic crowd. Jumping to an early lead on the efforts of Felipe Viana, Jared Sheldon, and Matt Coppola, Team Greenville was able to stave off a strong Charlotte offensive run in the fourth chukker to defend their title in Tryon Stadium. Team Charlotte was represented by Trevor Niznik, Mike Azzaro, and Patrick Uretz for a formidable trio to challenge the defending champions. The last two chukkers had fans on the edge of their seats as Greenville secured the win, taking home the top prize of $21,000.

MVP of the night, Felipe Viana, relayed that Team Greenville “clicked right away” despite not having all played in the famed arena prior to the match: “I think we all felt very comfortable playing with each other. We started with a strong defense and then were able to attack pretty quickly. We already kept a positive attitude, and we had a great time out there,” he said. “We got lucky as well – you have to have luck on your side in this sport. We won by one goal, and these games are always going to be very tight.”

Viana, a giant in the sport coming back to arena polo after a two-year hiatus, was thrilled to play in Tryon Stadium for the first time, and shared, “This is my first time in Tryon – it’s a blast, and it’s amazing. It’s awesome to see the sport [get this kind of exposure] and everyone that plays polo will agree with that,” Viana said of the electric atmosphere. “We [the players] are selected to put on a good show and to be ambassadors of the sport, and we thank the people who allowed us to do this tonight, and the people who brought horses for some of us to borrow. It’s great to put our names out there, and the prize money is great, too. We all live off the sport, so that’s an extra incentive!”

Team Greenville’s Matt Coppola was also a first-time Gladiator Polo™ competitor at TIEC, and relayed that the experience was “unbelievable,” he said. “It was my first time here, and the fans were so into the game. The venue is beyond amazing, and all around it was just a lot of fun. I’m really happy that I got the opportunity to come!” Coppola continued, “We were just trying to play open polo, meaning hit it [the ball] and run, and play hard defense, and I think we did that well. We had a bad fifth and sixth chukker, but we managed to hold on and we got the job done.”

Veteran Gladiator Polo™ competitor at TIEC, Jared Sheldon, was praised by his teammates for coming back to the sport for a strong performance after a significant injury this winter. “I basically ripped the tendon off my bone in January, and they surgically repaired it,” he explained. “So, I’ve been back in the saddle for a little over three weeks, and it’s been about seven or eight months since I’ve played. This is my first game back, but it felt amazing to get back out there!”

Sheldon emphasized that the energy of the crowd was a huge motivator for a tired Team Greenville as they defended their title late in the game. “For me especially, coming back from the injury, I got a little tired, so the crowd helped us players to feed off of that and kept us going. It [the energy] gives us that little extra to finish the game off the way we need to,” he explained. “It was a blast. It was fun to get back out there. The crowd was amazing. The venue was amazing, as always, and it was a heck of a game. We made it a little closer than we wanted to, but we got it done!”

“I want to thank the other team,” said Viana following the awards ceremony. “We all played hard and respected each other, and we all put it on the line, but there was never a moment of bad faith, and that’s hard to find. I want to thank them all for taking care of us as we took care of them and played hard. Polo is a game we play because of pride. We want to be good at it. We want to thank Gladiator Polo™, Tryon International Equestrian Center, and Mark Bellissimo for allowing us the opportunity to play here.”

Throughout the week, Gladiator Polo™ competitors served as coaches to participants in the Ninja Polo™ Camp at TIEC proudly supported by the Polo Training Foundation, prepping them for a two-chukker showcase in Tryon Stadium ahead of the match and giving participants the opportunity to learn from some of the world’s best arena polo players. Sheldon emphasized that the young stars were a joy to work with and that the inaugural camp has an exciting future ahead growing the sport of polo:

“The kids were great,” he said. “I love working with the kids, and especially ones like these that are so focused and really into the sport. [These kids] want to get better and listen, and really give their best effort, so it was great to work with them.”