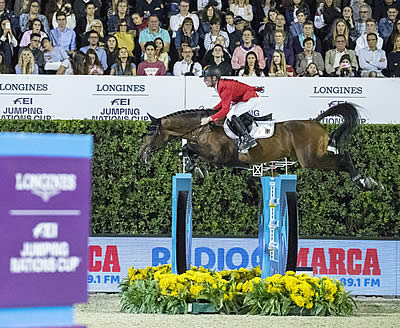 USA finishes second ahead of Brazil in third

Marcus Ehning was the hero of the hour when clinching the Challenge Cup for Germany at the Longines FEI Nations Cup™ Jumping Final 2018 in Barcelona (ESP) riding Comme Il Faut. Team-mate Philipp Weishaupt produced a foot-perfect pathfinding run from the lovely mare Asathir, but when Hans-Dieter Dreher left two fences on the floor with Berlinda and youngest team member Maurice Tebbel had a fence down and a time fault with Chacco’s Son, then all the pressure was piled on Ehning’s shoulders. He knew exactly what he had to do because he’s done it so many times before.

“I had to go clear to win the class. This last 20 years I’ve been doing the sport I’m used to the pressure. Especially this year I had a few rounds where I had to be clear and I was lucky I was clear, but I hope that will change and that in future years the pressure is on someone else!” — Marcus Ehning (Team Germany)

Of the seven competing nations there were two with just three team-members, Canada who started out that way in the first round of the Final and USA whose numbers were reduced when Jessica Springsteen and RMF Zecilie were a late withdrawal. But Alex Granato really rose to the occasion by steering Carlchen W through a foot-perfect round. So when all the US had to count was a double-error from Andy Kocher and Kahlua and a single time fault from Lucy Deslauriers with Hester, then their nine-fault total was good enough for runner-up spot.

That time fault was costly, however, because Deslauriers was the last of the five riders chasing down a €50,000 bonus on offer to anyone producing clear rounds. If she had been just that little bit faster, she would have had it all to herself.

Brazil lined up third on 10 faults ahead of Spain with 15, Canada with 16, Great Britain with 20, and the United Arab Emirates on a big score of 40 faults.

The Germans had mixed feelings about their success. The competition was open to the teams that did not qualify in the first round for the top-eight Final. Philipp Weishaupt said it was tough to miss the cut by such a narrow margin when time was taken into account after four teams completed with an eight-fault scoreline. “We missed out by less than a second, and it wasn’t so easy to keep the motivation up today. We put our breeches on in the hotel and came out to jump tonight but all the other teams had their jeans on. But we knew we had to do it and we knew we had to try our best,” he added.

Ehning, who along with Tebbel was a member of the German team that claimed bronze at the FEI World Equestrian Games™ 2018 in Tryon, USA two weeks ago when their team-mate, Simone Blum, also took the individual title with the lovely mare DSP Alice, is one of the world’s most admired horsemen. He had the crowd spell-bound as he cruised at high speed around the track to bring glory to his country once again.

When asked how he prepared to go into such a pressure round, he explained that Comme Il Faut had been jumping too high in the practice arena, so he schooled him over small fences to get him to jump lower which would allow them to take on the course at greater speed.

“Especially at the first fence I wanted him to be fast. The time was a bit tight… but if you can flow with him then you just have to follow him and he makes it very easy for the rider; he’s a very clever horse!” — Marcus Ehning (Team Germany)

Meanwhile, his Chef d’Equipe described the Longines FEI Jumping Nations Cup™ series as “the biggest thing we have in our sport! All of our different stakeholders are fighting for it: the breeders, supporters, owners, the riders, the Chefs’ d’Equipe, the Federations, everybody. It’s something special to be in a team, to fight with a team, to lose or win together for your country. I love this!” Otto Becker said.