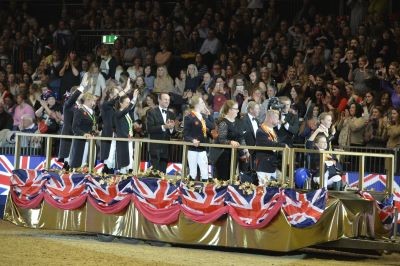 In a tribute to the outstanding achievements of the British equestrian athletes at the Tokyo 2020 Olympic Games, The London International Horse Show will welcome the Team GB Olympic and Paralympic Equestrian heroes in a celebratory parade, which will take place during the afternoon performance on Friday 17 December.

Leading the way will be Individual Show Jumping gold medallist, Ben Maher, who adds a Tokyo medal to his Team gold at the London Olympics in 2012. Maher will be joined by the gold medal-winning Eventing team of Oliver Townend, Laura Collett, and Tom McEwen. After a fantastic performance across all three phases, the team secured Great Britain’s first Eventing Team title for 49 years. 30-year-old McEwen then went on to claim the Individual silver medal with a foot-perfect performance aboard Toledo De Kerser.

Despite an inexperienced team of horses heading to Tokyo for the Dressage, the British team, comprising Charlotte Dujardin, Charlotte Fry, and Carl Hester, surpassed all expectations to come away with a Team bronze medal. Dujardin, riding the stunning chestnut Gio, followed up with an Individual bronze to add to her already impressive medal tally, which now includes three golds, one silver, and two bronzes. In doing so, Dujardin rewrote history to briefly become Britain’s all-time most decorated female Olympian – a feat she now shares with Cycling’s Laura Kenny, after Kenny’s triumphs a few days later.

The London International Horse Show – this year taking place at ExCeL London from 16-20 December 2021 – will provide an opportunity for the athletes to celebrate in front of a crowd, something they were unable to experience in Tokyo. For fans, it will be a chance to hail the exceptional performances put on during the Games, proving Great Britain to be at the forefront of the sport, with some of the best horses and riders in the world.

More information about The London International Horse Show, including how to buy tickets to be part of this exclusive Olympic celebration, can be found here.