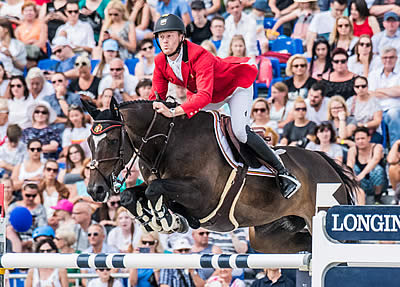 Team Belgium won the Longines FEI Jumping Nations Cup™ of Poland, but it was no walk in the park. This fourth leg of the Western European League attracted teams from eight countries to the Hippodrome Arena in the popular seaside town of Sopot, and with six of those chasing down qualifying points for the Longines Final in Barcelona (ESP) in October it was always going to be a right royal battle.

Taking the early lead, Peter Weinberg’s side held on to reign supreme ahead of France in runner-up spot and the USA in third. Belgian anchorman, Niels Bruynseels (34), didn’t have to bring out his brilliant mare, Cas de Liberte, a second time but as he pointed out that wasn’t because it was an easy afternoon’s work.

“The course was tough – big and technical – and the time was quite tight, but we came here well prepared, with a strong team, strong riders and a good tactic, and everyone did a super job!” — Niels Bruynseels (Team Belgium)

Olaf Petersen Jr’s 12-fence course was certainly challenging. “The water (fence 5) was wide, there was a huge triple bar to a vertical (fences 9 and 10) and the last double (11) was very difficult,” Bruynseels pointed out. The distance to the big final water-tray oxer also caught out several of the big names in the first round, including French stalwart Kevin Staut (For Joy van’t Zorgvliet HDC) and American legend Margie Goldstein-Engle (Royce).

But it was Staut’s second-round clear that pulled his side back into the frame on a day when Mathieu Billot and Shiva d’Amaury, heroes of the French victory in St Gallen (SUI) two weeks ago, will want to forget. Olivier Robert didn’t have to jump in either round at the Swiss fixture because his team-mates were so impressive. But he helped France secure second spot with the only double-clear of the entire competition from his 14-year-old gelding Eros.

Foot-perfect runs from Olivier Philippaerts (24) and H&M Ikker and Jerome Guery (37) with Garfield de Tijl des Templiers meant that the four faults collected by Pieter Devos and Claire Z was the Belgian drop-score first time out and Bruynseels single time penalty was all they would carry into round two. Philippaerts double-faulted second time out, but Devos was clear and by the time Guery came home with just four on the board it was all over. Their 13-fault total could not be bettered.

Lying second on four faults at the halfway stage the Swedes disappeared from the reckoning, and a final tally of 16 moved the French into runner-up position while 21 faults secured third place for Team USA on a high-scoring afternoon.

The Belgians now head to Rotterdam in The Netherlands next Sunday (24 June) for the fifth round of the eight-leg Western European series lying just 10 points behind the league leaders from Switzerland and 20 points ahead of France, and with the tension increasing with every outing.