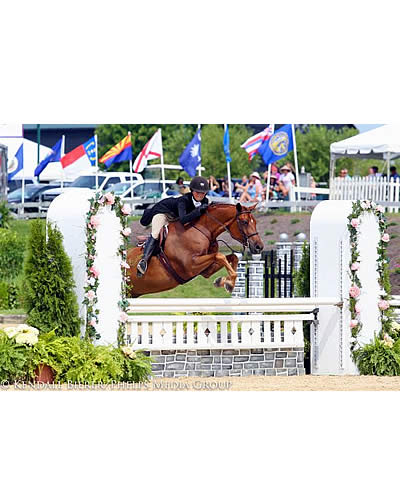 Lexington, KY – August 6, 2014 – For 16-year-old Taylor St. Jacques, competing at the 2015 USEF Pony Finals is bittersweet. After four years of showing in the prestigious event, St. Jacques has decided to turn the reins over to a new team of riders, but first she closed out the competition with a strong finish in the Large Regular Pony Hunters, standing poised in the winner’s circle to accept the division’s championship with the Welsh gelding Glynhafan Red Kestral, owned by Peacock Ridge.

“I am so excited!” St. Jacques smiled. “We all teamed up with this pony at the beginning of Wellington this year and kept saying that he has such great potential, and we kept working with him and figuring him out. Every time we went in the ring it got better and better and better. He is really a special pony.”

St. Jacques worked with the Rizvi family during her winter-stay in Wellington, Florida, riding the pony, affectionately referred to as ‘KP,’ every week. Since the end of the winter circuit, she has only had the opportunity to ride him twice, since he is stabled in Connecticut and St. Jacques lives in Virginia.

Knowing the pressure that rested on her shoulders, ranked as the sixth rider overall prior to the over fences, St. Jacques knew she had to stay unruffled in order to earn the top call.

“The thing that I keep in my head during Pony Finals is that the over fences part is the most important, so you still have a great chance if you’re in the top 20,” she explained. “Going in I was thinking to myself, ‘OK, I know how to ride this pony, and we are a great team. We can figure this out. As long as I stay smooth, we got this.'”

And so they did. The pair took the top award in the over fences phase to take the lead with 260.61 points. Their cumulative score of 1,025.39 points put them 2.76 points ahead of first-day leader, Morgan Ward with Dr. Betsee Parker’s Enjoy the Laughter. The grey gelding placed as the bridesmaid for the second consecutive year, falling just shy of the championship that seems just out of reach. Third place overall was awarded to Abigail Brayman and Dreamland, for their over fences score of 253.10 points to boost them from the 11th position with a final cumulative score of 999.93 points.

St. Jacques laughed about Glynhafan Red Kestral’s disposition. “He likes to over-exaggerate and be like ‘Look at me; look how great I am!’ He tries his hardest over the jumps. He has such an incredible personality, and he is so beautiful overall. He always wants to be told how great he is. If you tell him he’s bad, he gets mad at you.”

“I think they have everything it takes,” St. Jacques said. “He is a great pony and she is a wonderful rider-they have all the makings to be the next pony superstars.”

Although Pony Finals are over after this year for the 16-year-old, St. Jacques plans to continue competing in the big equitation classes, as well as the jumpers, which she has recently become involved with. She was nothing but one large smile and two dimples as she patted KP and posed with the array of ribbons.

“I just love it here, being around all the horses and ponies and the people. Everyone is so kind in the horse world,” she concluded.

Taking home the rosette in the Small Green Pony Hunter division was Bibby Hill’s Woodlands Polar Bear, ridden to victory by Devin Seek of Ocala, Florida. Seek and the little grey gelding began the day in sixth position, but they put up the strongest over fences scores of the division to overtake the early leaders and claim the championship title with their cumulative marks of 990.550 points.

Champion last year in the Large Regular Pony Hunter division with Hudson, Seek was visibly excited to have repeated her efforts to the tune of another tricolor.

“Coming back after a win last year with Hudson, I knew that it helped my chances. Bibby [Hill] has helped me a lot and has awesome ponies for me to be able to ride, so I knew that if I did what I did last year and had a good ride, that I would have a good chance. It all worked out,” Seek commented.

The 15-year-old was quick to praise ‘Polar Bear’ and attributed his cool, calm and collected nature as a notable factor contributing to their place atop the leader board.

“He is the barn favorite. All the little kids love him because he is so social and couldn’t care less. He’ll do anything. The short stirrup kids ride him, and he will walk through the water in the cross country course,” Seek said. “He is so simple-minded, especially for a green pony. He’s only 7 or 8 years old. All he cares about is doing his job.”

Reserve champion in the Small Green Pony Hunter was Jessie Spade’s entry With Applause, with Sophia Calamari in the irons. The runner-up pair put up a good fight and finished less than a point behind the leader with a score of 989.660 points.

The Regular Small Pony division got underway Wednesday, and leading the standings going into Thursday’s over fences rounds is Maple Leaf Opulence, ridden by Hunter Champey and owned by MDHT Equestrian LLC out of Far Hills, New Jersey. The leading pair finished the day with two top placings under their belt, having earned the second place ribbon in the model, followed by the sixth place in the under saddle, to accumulate a total of 510.03 points.

Less than half a point behind with a score of 509.70 points in the current reserve rank is New York City-based Mimi Gochman with Love Me Tender, owned by Dr. Betsee Parker of Middleburg, Virginia.

It was Ashley Schneider and Falling Moon Huckleberry that captured the blue ribbon in the model. It was an emotional win for the 10-year-old as she stroked her pony’s blaze. Tears came to her eyes as she smiled and spoke of the chestnut, and their first experience competing at the U.S. Pony Finals.

“I have been riding him since last April, and we have gotten to know each other pretty well,” Schneider said. “I think it is his markings that really make him stand out. He also has such a strong personality; he is very playful.

“Winning a ribbon at my first Pony Finals means so much, and I never expected it. I am in shock right now. This pony means so much to me; to be here with him and win, it’s so exciting.”

Chicago’s Olivia Markman and Benlea Mizzou or ‘Mazzy’ took the top call in the Small Regular Pony Under Saddle, finishing just ahead of Gochman and Love Me Tender. Markman received Benlea Mizzou as a birthday present last November, and the 10-year-old could not stop smiling as she talked about his standout qualities.

Mazzy is known for nuzzling Markman, as well as drinking the occasional Gatorade in the barn. His mischievous personality stems from his love for his rider, even whinnying for her the moment she walks through the barn door.

“I know he’s really cute, and he is a really good jumper, so we are looking forward to tomorrow,” Markman said. “This is my first year competing, and it is really exciting to do so well. I qualified and thought that I would go; I had no idea how I would do. It would be crazy to get a championship, but we are having fun!”

The Small Pony Hunters kick off Thursday, with the Medium Green Pony Model beginning at 7 a.m., followed by the Large Green Pony Model. The under saddle classes for each division are slated to run from 8 a.m. until shortly after noon, when the Small Regular Pony Hunters will commence their over fences.