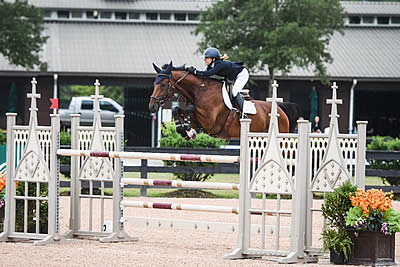 “I loved the first round; it was a little different than the courses we’ve been riding. It was, I thought, a little bit more connected, which I really liked,” Land shared of the J. P. Godard (Aiken, SC) designed course. Godard’s course tested 32 entries in the initial round, with 18 horse-and-rider pairs welcomed back to challenge the jump-off track.

Land and Get Go, a 2012 Hanoverian gelding (Grey Top x World Diamond O) owned by Pinetree Farms Inc., started out this year competing in the seven-year-old jumper division, but after his performance at Spruce Meadows, where the jumps were 1.40m, Land felt like he was ready for the next step. “He’s really grown up so much this year. He started the year just jumping the seven-year-olds and now he has moved up to doing the smaller Grand Prix classes and I think we just have to keep on our track and try to keep moving forward one step at a time.” Land continued, “I’m really excited for his future!”

Although the talent is a huge part of her success, Land admitted that none of this would happen if it weren’t for her team: “My team that’s behind me right now is amazing. I’ve had my rider, Liz, now for a year and she has helped me so much with the horses. She’s my support system at home and that makes such a difference. My parents also help me so much whether it’s coaching, training horses, or just as support – it’s just amazing to have them.”

Land concluded: “I think these horses are just at a point where I’ve had them for a long time, and we are to the point now where we’re really teammates. It feels like we are progressing to the next level together for all three of the horses. I’ve had Falco [V] for three years and the other two [Get Go and Liroy 30] for two years, and it’s just enough time to really get to know them. You feel like it should just take six months, but it doesn’t. It takes a long time and they’re just all coming into their own, and it’s fun to have them really reaching an exciting point at the same time.”