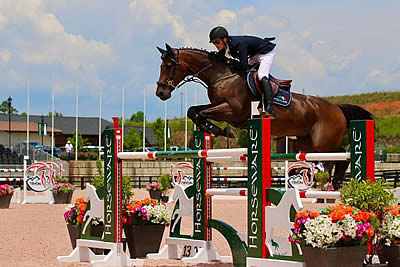 “I’m beyond excited for this opportunity, to the point where it’s hard to explain,” said Korotkin, 18. “I have my own big dreams, like most riders, and to have the opportunity to learn from Shane, one of the best riders on the Irish squad, is a huge opportunity that most don’t get. There are countless things that I know I’ll learn, both on and off of a horse, and I’m ready for every bit of it.”

Korotkin has gotten off to a strong start with his new team, riding Castlewood Farm’s Deauville S to a top 10 finish in the $75,000 Grand Prix at Tryon Spring, the pair’s first competition stateside after debuting this winter on the Sunshine Tour in Spain. Korotkin also got back in the ring aboard Sandalwood Farm’s Country Boy, another new partnership that debuted in February at the Winter Equestrian Festival in Wellington, FL, and logged rounds aboard Sweet Oak Farm’s Indiana Twin and 8-year-old FLB Lux Inclusive.

“Tanner has been with us two weeks now, and he fit right in straight away,” said Sweetnam, a veteran of the 2018 World Equestrian Games and a member of the Irish squad that took top honors at the 2017 European Championships in Rotterdam, The Netherlands. “He’s working very hard and has already put in some good rounds. He comes with a good education from his parents at Castlewood and also with Missy and John. I think it’s going to be another step in the learning process for his career.

“He’s a talented rider and can be a real plus to the team here at Sweet Oak Farm,” he added.

“So far, everything’s going great,” Korotkin said. “Deauville S and Country Boy both jumped absolutely incredible their first show back post-quarantine. I have already learned so much from Shane, and I am getting the opportunity to ride great horses. I definitely think it has been helping me in the show ring.”