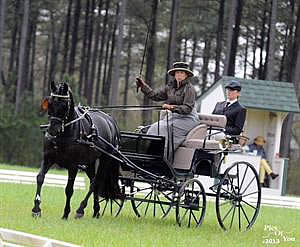 Stafford (Wilmington, DE) and Wendy O’Brien’s TTE Tea Time drove as the final competitors in the division and set the tone from the very start of the test. The Individual Silver medalist from the 2011 FEI World Driving Championships for Combined Ponies utilized her years of experience to produce a consistent and precise effort with the nine-year-old Morgan gelding.

Heading to the marathon in second place is Jennifer Matheson on a score of 49.39. Matheson (Aiken, SC) drove Katrina Becker’s Bax and Danyloo in the first phase.

In the dressage, Stroud (West Grove, PA) drove her own Sir Patrick (a 14-year-old Connemara gelding), With Flair (a 14-year-old Welsh gelding), Kilkerin Edward (a 16-year-old Welsh gelding) and Mystic (a 13-year-old New Forest Pony gelding). The nine-time National Champion had a consistent test, highlighted by relaxed walk work. She will head out onto the marathon with a six-point lead.

In second place in the USEF National Combined Driving Pony Team Championship is Heather Schneider (Palm City, FL) who drove her own Rambo, Patrick, Cloud 9 and Jazz to a score of 56.64.

Competition continues for all divisions with the marathon on Saturday.