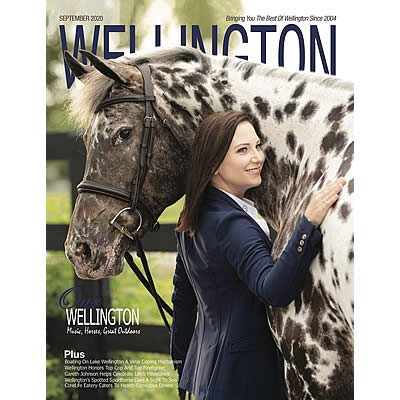 Wellington, FL (September 3, 2020) – Danash’s Northern Tempest, also known as Dani the Wonder Horse, logged her first ever magazine cover this September, with her spectacular coat and expressive profile gracing the front of this month’s issue of Wellington the Magazine. Accompanied by her rider, Laura Reece, the mare’s first cover in her hometown magazine also features a story on her success in the show ring and the confidence she’s inspired in Reece’s return to the saddle.

With such avant garde style and standout coat color, Dani’s alluring look has recently attracted the attention of some of the world’s top equestrian brands. From photo shoots to shows to scheduled appearances, Dani and Reece will have a bustling 2020, and are growing their exceptionally engaged Instagram following as more and more fans join the journey of Dani the Wonder Horse.

Wellington, FL – January 3, 2011 – Tackeria Owner, local celebrity, and voice of Polo, Tony Coppola, has been awarded Wellington the Magazine’s Entrepreneur of the Year for 2010.

Originally from Long Island, NY, Coppola’s love of Polo brought him to South Florida in 1969. Early on, he spent winters in Florida playing the sport he loved, but eventually opened the Tackeria in a bus in Lake Worth at the Gulfstream Polo Club. He has since moved the store twice and has settled in the best location possible on South Shore Boulevard in the heart of Wellington’s equestrian community.

Congratulations to you, Tony!